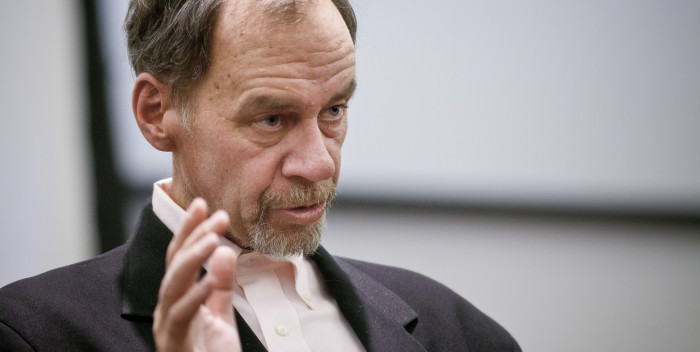 I asked Paula Schwartz, who worked with Dave Carr on the Carpetbagger column, to share a few words about our friend. Here they are:

I am re-reading all my e-mails from David, as far back as 2007. We worked together on the Carpetbagger blog for three years. He wrote three thousand words a day and I know because Gawker counted. He was a verbal acrobat. He was the Bagger and called me the Baguette. He came up with the cheesy name and it made me laugh. I learned how hard it was to write in the third person. And he tried to teach me to write shorter. As busy as he was he always sent me a note to thank me for getting him into a party, telling him about an event or just steering him in the right direction. He made a point of complimenting and encouraging me when he liked what I wrote. We e-mailed back and forth all hours of the night, 2-3 am, on the column. His mind moved so fast, the mental equivalent of a jazz musician, and sometimes it took me a while to figure out what he meant. Sometimes the next day even but that was the challenge and fun of being in his world. He was the smartest guy in the room and the kindest. This combination is miraculous at the New York Times.

He was more fun to work with than you can imagine. He had a sort of innocence, fish out of water view about the showbiz world when he began the column, and his posts were hilarious but illuminated what was underneath the gloss and glamor and revealed stuff you aren’t often allowed to see in that world. Also how it related and contrasted to our own lives. His writing cut through the bull. Like few writers nowadays, you didn’t need to read the byline to know it was a David Carr story.

I have just been stunned by this loss. He loved working at the Times. He was incredibly loyal but truthful about the place. That he died in the newsroom he loved didn’t surprise me but too early at least by forty years.

He loved his wife Jill and their gorgeous daughters above all. I am so sorry for their loss. He talked often about them. They were the inspiration for everything positive he did in his life as he said in his book.

I am clutching a copy of his book that he gave me, “The Night of the Gun.” He inscribed: “We are true partners in crime and I adore working with you and calling you my friend xo David.”

He was a very generous man, a real mensch. The loss is stunning and hard for everyone who was lucky enough to be in his orbit.

This is one of my first posts for him, a party at Sting’s house and he sent me a note saying how much he liked it and how we were off and running on the season’s awards season: