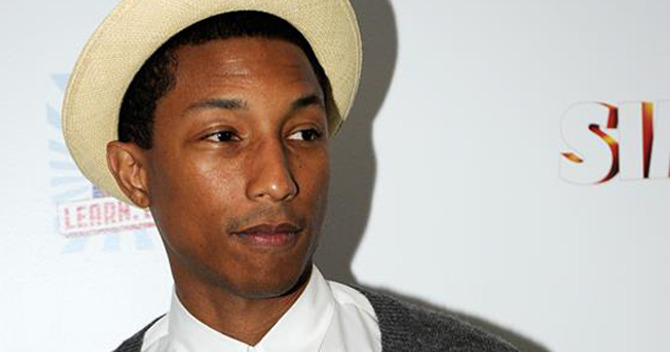 Notes from rehearsals at the Bev Hilton for Clive Davis’s dinner– tonight:
Clive: “It never gets anything less than most vibrant and the pride in the music that is being created. We have an incredible lineup mixing new and establish artists.  All qualitative, It will be a night of incredible music.
It’s putting on a 3 hour show that brings you to the height of musical talent.  Taylor Swift called and told me how excited she is to come, Puffy, VP Gore, Nancy Pelosi, Tim Cook.  The Billboard story, the six pages, just floored me.”
Clive is getting the NAACP award tonight.  He said: “Aretha, George Lucas, Steven Spielberg, have gotten it before, it’s is very special.  I’ve been talking to them and really moved that the artists over the years, and the music that I’ve helped give birth to has had the affect on culture that it has. And I”m keeping at it.”
Pharrell Williams came in. He was quick and  sang ‘Get Lucky.’  He told me “I’m blessed  that Clive asked me here.” I’m excited about it all.”
Carole King was next, she was supposed to rehearse a number with Pharrell but she was stuck in traffic. She  was very apologetic to Clive and recounted the last time she saw him was ‘that very sad night’ referring to Whitney Houston’s untimely death in February 2012. Carole rehearsed “You Got A Friend” and “Beautiful.”
Funny moment. Joyce Moore , wife and manager of Sam Moore greeted Carole: “If my husband were here I know you would be feeling his tuchas.” Carole looked a bit incredulous, that’s when Joyce explained who she was, to which Carole then let out a huge laugh at the inside joke. Joyce later told me that “Sam and Carole were label mates at Atlantic and have been friend for 50 years. Sam has a great ass so when they see each other Carole likes to touch it.”
Band leader Rickey Minor told me , “This is an opportunity to celebrate music and music makers and the singers that sing the songs. Clive has a way of bringing everyone together so that everyone leaves their egos outside the door.  Everyone comes to celebrate him and each other in a non competitive way.  Pure celebration.”
Surviving Bee Gee Barry Gibb told me that, “I’m thrilled to be here and honestly a bit shocked that Clive asked me.” When I asked him how was he’s faring, he answered “You know I’m the eldest, it doesn’t make sense. I always thought we would go grow old together and talk about the old days. I still have the memories though and my brothers will always be with me.”
John Legend and Meghan Trainor rehearsed  “Like I’m Going to Lose You.” After they sang she said, “that sounds so freaking good.” Mary J Blige, Sam Smith and Smokey Robinson followed.
More to come — tonight–can’t wait–
photo of John Legend and Meghan Trainor, c 2015 Showbiz411