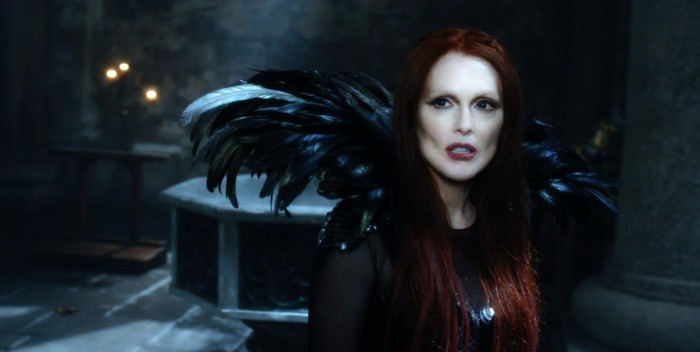 “Seventh Son” is on the brink of failure– its Rotten Tomatoes score is pretty much nil– but we still love Julianne Moore and Jeff Bridges. PAULA SCHWARTZ interviewed them last week:

Black magic, witches and “The Dude” dominated the conversation at the press conference to promote “Seventh Son,” the supernatural fantasy adventure starring Jeff Bridges and Julianne Moore, which opens Friday.

All “The Dude” talk at the press event was natural since many journalist questions revolved around the stars reteaming for the first time since “The Big Lebowski,” the 1998 Coen brothers comedy that has a huge cult following.

“It’s been 17 years and I have a little Lebowski to prove it,” Moore laughed. She played avant-garde artist and feminist, Maude, in the cult film. “I was pregnant, and I actually got pregnant – it was not Jeff’s – on ‘The Big Lebowski.” My son is 17 years old, and so that’s how we noticed 17 years (had gone by). Isn’t it crazy?”

Bridges cracked, “Not many people know this, but I think we can let this out of the bag, that this film is actually a prequel to that.”

Moore added that it was great to be with Bridges on the screen together again and that they knew audiences brought that familiarity and resonance with them when they viewed “Seventh Son.”

“There’s that sense of, ‘Oh, I know those guys, they were in a movie together before,’” Moore mused, “so that kind of comes along with you and it was something I hadn’t really anticipated. And it’s a really cool thing.”

The supernatural story of “Seventh Son” revolves around Bridges as Master Gregory, the last warrior of a mystical order, who fights dark forces, primarily in the form of an evil witch Queen, Mother Malkin (Moore). Gregory and Mother have a history – they were once lovers – but he dumped her for another woman who he married. Malkin murdered Gregory’s wife, and the grizzly warrior vanquished the dark Queen and threw her down a dark hole, supposedly for eternity. Mother Malkin escaped and is hellbent on revenge. She kills Gregory’s apprentice (Kit Harrington, on screen for about five minutes), so Gregory travels the kingdom to find the prophesized hero born with mystical powers (Ben Barnes) who will help him battle the dark Queen and her army of supernatural henchmen, led by Radu, played by Djimon Hounsou. One of the more nifty special effects is how Moore’s character shape changes into a fire-breathing dragon with a spiny back and rapier-sharp talons.

Bridges said he didn’t blame Moore’s character for wanting revenge. “After all, she had every right to be pissed off. Her boyfriend, the one that she loved, locked her in a hole for many years.”

Bridges responded to wacky press questions with zen-like calm in Dude mode.
Asked about the role of fate and destiny in his life, Bridges replied, “As the Dude might say, this is just my opinion, man. You got the universe, right? You got all that black holes and the whole deal, and all that stuff we don’t know about. Yet here we are, right? And somehow the universe has, we’ve come out of the universe. I’m thinking of (philosopher) Alan Watts, that guy… He said apple trees make apples, right? And the universe people. We just come out of this, so it’s kind of destiny I guess, or fate that here we are. And this comes out of the Big Bang. It resulted in all this happening. And here we are. And all of our challenges and our dilemmas are fate. And all of those dilemmas can be wonderful or lessons for us, to teach us.”

Asked to compare The Dude of “The Big Lebowski” with his character of the mystical warrior in “Seventh Son,” Bridges riffed, “There are some weird parallels. I think of Maude flying at me like her dragon. The Dude liked to smoke it, drink it, and you know Gregory, I’m sure, has some kind of smoking mixture that he probably would light up on. There are probably some similarities. I haven’t really thought too much about it.”

Explaining his slurred speech as Master Gregory, which again sounds eerily like The Dude, Bridges explained that it was his idea to wear weird rotten-looking teeth, a good concept, but somewhat overshadowed by a straggly wig.

“I’m thinking, ‘We’re in the Dark Ages, you’re not going to have good teeth,” Bridges explained, “so I wore these teeth, which you couldn’t see at all cause of all of that hair,” he laughed. “But that probably made me slur a little bit, so that’s the truthful answer I guess.”
>Asked how she prepared for the red carpets, especially now she’s headed for the Oscars for “Still Alice,” and whether Bridges, who won a gold statuette for “Crazy Heart,” gave her any advice, Moore, who is a five-time Oscar nominee, playfully replied, “Well first I take a bath. And then I tie my tail up.” Everyone laughed.

Moore added that she was still amazed at her nomination for “Still Alice.” She mused, “Half the time you make little movies and no one ever sees them, so I feel very, very grateful.”

As for awards advice, Bridges said he and Moore talked about all the emotions involved. “That appreciation that comes at you like that is pretty wonderful,” Bridges said. Then he turned to Moore and enthused. “Hang on babe! It’s a little bit of a ride. Surf that big wave!”