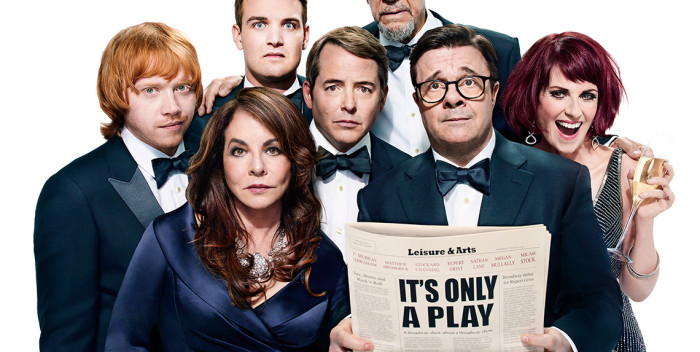 Does Nathan Lane have drawing power on Broadway? Evidently, a lot. When he and Matthew Broderick were starring in “It’s Only a Play” during the fall, the average weekly box office was well over a million dollars. The comedy was pulling in weeks of $1.3 million and $1.4 million. The absolute zenith came the week of January 4th– Lane’s last week–at $1,455,818.

Almost four weeks later, the graph for “It’s Only a Play” is pretty shocking. Lane is gone, replaced by the tremendously talented Martin Short. Lane isn’t the only thing gone. So are the receipts. Last week, the show took in $462.008. A million bucks have left the theater with Lane.

Still, “It’s Only a Play” goes on. The producers just announced a new extension through mid June. The very funny comedy is playing at 87% capacity. This is nothing to sneeze at. “It’s Only a Play” is only a play after all. It was doing business like a hit musical. But if the graph on Playbill.com were a real EKG on a human being, the patient would be dead. Luckily, that’s not the case here.

Short and Broderick are still there, by the way, as are Oscar nominee Stockard Channing and Oscar winner F. Murray Abraham. They added one of Broadway’s greats, Tony winner Katie Finneran. Plus Micah Stock remains, hilarious as ever. And the show added Maulik Pancholy, who was so deft as Alec Baldwin’s long suffering assistant on “30 Rock” for years.

I’m going back in the next couple of weeks to see this cast. This Terrence McNally comedy is a hoot– I haven’t laughed that hard in a comedy since “Noises Off.” A good winter pick me up, that’s for sure!