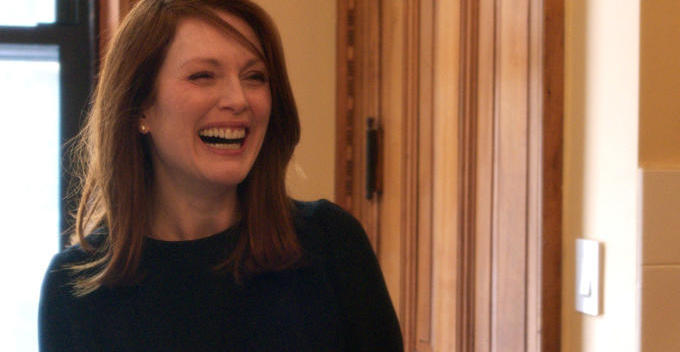 Julianne Moore was asked on the red carpet at her Museum of the Moving Image tribute in Manhattan last night about how much pressure she felt about winning an Oscar for “Still Alice.” It was a sure thing, a reporter told her, after her Golden Globe win.

“You know what?” Moore said, looking fabulous in an embellished metallic short gown with long sleeves, her red hair swept high in a bun, “I think you have to be grateful for everything that comes your way, there’s never a guarantee. You never know if anyone’s going to even see your movie, and the fact that it got this much attention is really incredible.”

About her portrayal as a linguistics professor with early-onset Alzheimer’s, which has earned her a fifth Oscar nomination, Moore said of the role, “One of the things it says about us as people is we have to consider who are central selves are. Who are we if we start to lose the things that people use to redefine us? Are we still there? Who do we still love? I think the thing this movie posits is that a human life is more than what we think it is. It encompasses more than we know.”

The gorgeous 54-year-old movie star received a two minute standing ovation that kicked off the evening of loving tributes and accolades by A-listers, who included Moore’s husband, writer-director Bart Freundlich; Mark Ruffalo (via video); Michael Parker, Sony Pictures Classics chief and new Museum chairman, and outgoing Museum chairman, Herb Schlosser; along with Billy Crudup, Rebecca Miller, Sarah Paulson, Ethan Hawke, Steve Buscemi and Chloë Grace Moretz, who introduced clips from some of Moore’s celebrated films, including “A Single Man” (2009), “The Big Lebowski” (1998), “Boogie Nights,” (1997), “The End of the Affair” (1999), “The Kids Are All Right” (2010), “The Myth of Fingerprints” (1997) and “Short Cuts” (1993).

“It’s kind of crazy because my children are here and they haven’t seen any of my films, except the ones I’ve made with their Dad, just parts of them,” Julianne Moore said in her eloquent speech that topped the evening. She shared the award with her husband and kids, Liv, 12 and Caleb, 17. It’s all “pretend” she told them, “the cigarettes were fake.” 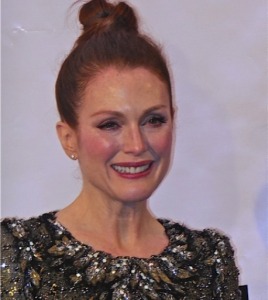 Moore included in her thanks, appreciation to her friends who spoke “so eloquently,” Michael Barker, her representatives and publicists. “This is not something I ever expected, certainly not while I was alive to see it,” she joked. “I received a star on the Hollywood Walk of Fame last year, and I made a lot of jokes to my family and to anyone else who would listen that now I don’t need a tombstone.” Everyone laughed. “Now I feel like I don’t’ need a memorial service either. Thank you! You saved my family a lot of money,” she joked.

The actress said the evening’s tribute inspired her to think about on how she became an actor. “I never ever imagined that I would be a movie actor. When I was a kid I liked to read and I was pretty good at school and I wasn’t athletically inclined and I had no hobbies so I ended up trying out for the school play like the rest of the nerds,” she said. She said it surprised her to discover acting didn’t feel any differently than reading out loud or pretending and teachers encouraged her in the pursuit. “It wasn’t because I’d seen a lot of plays or known any actors or knew anything about the theater. I just liked how acting made me feel, and I love stories and I thought that was a good enough reason to do something for a living. It was super, super practical!” she joked, as the audience laughed.

“When you’re young, you know you assume things without any knowledge about where you’ll be or how they’ll shape you’re life, but because this is a retrospective it’s forcing me to look back and consider what it was that got me here.” As a drama student in Boston she’d go to double features and one day she saw “Three Women,” the 1977 Robert Altman film starring Shelley Duvall, Sissy Spacey and Janice Rule. “I never heard of Robert Altman,” she said. “I loved this story – which Bob later told me was based on this dream he had – and I was actually shocked because it was the first time in my life I heard a directorial voice, a point of view, and I thought, that’s what I want to do. That’s the kind of acting I want to do. I want to work with that guy!”

It would be another decade of working in television and off off Broadway, where she noted, “That didn’t make a dent in the film world and not feeling like I saw those voices, the voices, like Bob’s voice in the scripts that I read. But then suddenly everything changed for me, and there were opportunities for me to work with astonishingly adventurous filmmakers, amazingly original stories and finally, finally, Robert Altman and then I realized that through independent film I actually become an actor, but even more important to me was how film shaped my life, not just professionally, by finally finding a place to tell these stories, but personally. When I read the script for ‘The Myth of Fingerprints’ and I met Bart Freundlich, and I loved his script and I loved his story and that’s what turned me towards him. But I never, ever, ever in my life imagined that making that movie would give me the personal life that I always dreamed of.”

Moore ended her speech with, “I’ve been so privileged to have this premiere and to be in so many exciting, interesting narratives, with so many tremendous filmmakers and so many unbelievable talented people, so many of whom are here tonight, but really it’s my own story, my own family story, Bart and Cal and Liv, who have given my life so much meaning,” she said. “This is an unbelievable evening, and I’m so very grateful.”

The evening’s highlights included a poignant video tribute by “Still Alice” writers-directors Wash Westmoreland and Richard Glatzer, who are also married. Mr. Glatzer has ALS and is unable to speak, but through his iPad, which has a robotic voice, he was to express his gratitude to her for taking on the starring role in their film. “There’s no one more deserving of this honor.” Adding her talent was “one of life’s mysteries.”

“The Kids Are All Right,” co-star Mark Ruffalo sent a message from Europe via video, “Sorry I’m not there but I am with you in art and spirit.” While Moretz, who is 17 years-old and spent some time talking to Moore’s teenage son, noted that she’d known “Julie since I was 15 years old and I feel, so, so lucky to have met here at such a young age. She taught me to always make decisions on movies and what characters you want to e be from your heart and you never choose it for fame or money. What you have and what you stand for in your career are the products of what you’ve put on screen.”

Ethan Hawke joked, “It’s funny, you don’t know how many awards you haven’t won until you Google Julianne.” And Steve Buscemi brought up one of Moore’s early films, “Tales From the Dark Side” (1990). “I think this is one maybe you’re kids can see, if they had a VCR. You played Christian Slater’s sister. You were killed by a mummy and came back to life. Good times.”

Julianne Moore’s husband, director-writer Bart Freundlich, got in some of the best lines.

“I’m questioning how we brought the kids. Never see those movies,” Freundlich joked. “Seeing this makes me realize how many people Julie has made out with on screen. That bothers me.”

He reminisced about meeting Moore some 20 years ago. “I was naïve enough to think that Julianne Moore would do my first movie. I was lucky enough that she read the script and decided that she would meet me. We met at the Peninsula Hotel. She was very late and I was very nervous. And we sat down and she said I liked your script man but it’s too long and something needs to be cut down. If it’s my part I wouldn’t be interested, to which I replied, ‘Will you marry me?” The audience laughed.

“I have a very special insight into Julianne Moore,” Freundlich said. “I’ve known her for 20 years. I’ve been married to her for 11 and had kids with her for 17. Directed her three times,” he said. “I’ve been with her through numerous sunburns. Four Oscar ceremonies, five to come,” everyone cheered. “A colostomy and her Broadway debut. I think the last two were equally uncomfortable for her. I don’t consider Julianne an actor. I consider her an artist. She conjures people off the page with her intelligence, boundless empathy, and unparalleled hard work. I always felt the success of our relationship was in part because the writer in me speaks to the actress in her. However I’ve come to understand, every writer whose words she’s read, believes that.”