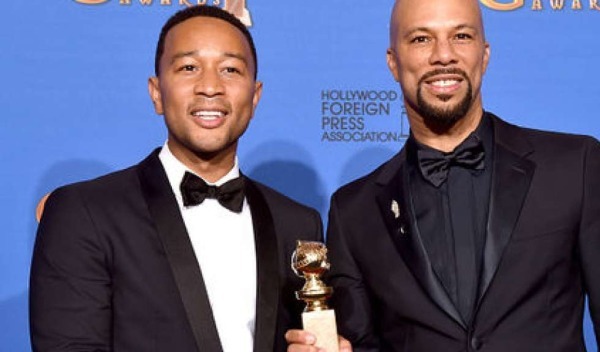 One of the great results of this year’s awards season is the music. Last night, uncommonly erudite rapper Common and singer songwriter John Legend won Best Song for “Glory,” their collaboration from the most excellent film “Selma.” Now the pair tell me they are talking about a whole album of music together. After hearing their acceptance speech last night, it’s clear they have caught lightning in a bottle.

Most of my readers will know all about John Legend, one of the few authentic and original voices of this century. Common flies a little more under the radar and “rapper” is almost an unfair rubric for him. He’s really a poet, as well as being an actor with lots of good movie and TV credits. He appears in “Selma” as James Bevel, an associate of Martin Luther King.

His real name is Lonnie Rashid Lynn, Jr. Initially he called himself Common Sense but there was some legal trademark that forced the cutting back of the name. His first album came out in 1992, and he published a best selling memoir a few years ago. He’s 42, and his politics may surprise you. Common has spoken out against abortion. I don’t know anything else about his politics, but I can tell you he’s a lively, thoughtful conversationalist with a good sense of humor. Apparently, he also dated Taraji P. Henson at one point, so you know he has good taste!

“Glory” is one of my two favorite movie songs this year. The other is “Lost Stars” from “Begin Again,” sung by Keira Knightley and Adam Levine and written by Gregg Alexander and Danielle Brisebois. I am hopeful that its success will encourage those two to make a follow up to their New Radicals album from 1998. Yes, 1998! They told me they’re talking about it.