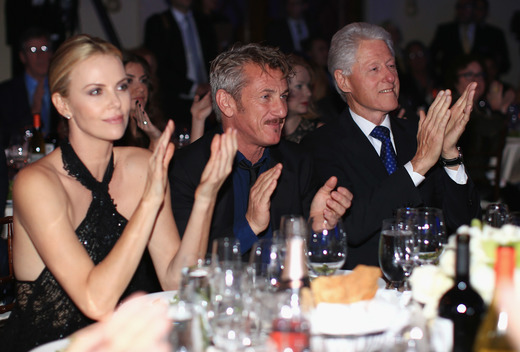 Bill Clinton won’t be at the Golden Globes tonight. When I asked him why–at Sean Penn’s Hollywood Haiti fundraiser on Saturday night–he said: “I gotta get home to my grandbaby.” I did try and push a button. “How are you going to get Hillary elected president?” I asked. Even with swarms of movie stars and Hollywood execs around him, Clinton didn’t miss a beat. “First she’s gotta run,” he responded.

With Clinton there, Penn’s Help Haiti Home raised $6 million from tickets and auction items. The ballroom at the Montage Hotel in Beverly Hills is not large, folks. I’ve been in bigger rooms where less money was collected. But Clinton’s appearance as honoree for the night caused quite a stir. During the bidding auction there were more paddles in the air than at a ping pong tournament.

And who was there? Well, Sean and Charlize Theron commanded the main table, where they were joined by host Bryan Lourd from CAA, Ben Stiller and Fisher Stevens. Reese Witherspoon and Salma Hayek, looking ever so glamorous, were right there too. Tabloid stars Ashton Kutcher and Mila Kunis were also front and center. I had a long talk with Black Eyed Peas’ will.i.am about his wearable technology, which he was showing to Neil Young’s fabled manager Elliot Roberts– and we got an earful about Neil’s just launched Pono music player.

There may have been more, but the room was so packed– and Clinton caused grid lock since everyone, no matter how famous, got a picture with him. And Clinton is still very much a rock star. He throws off thousands of watts of energy. But physically he is much less a presence in the past. He is very thin looking from his vegan diet. As an orator, though, he can still bring thunder and lightning to any room.