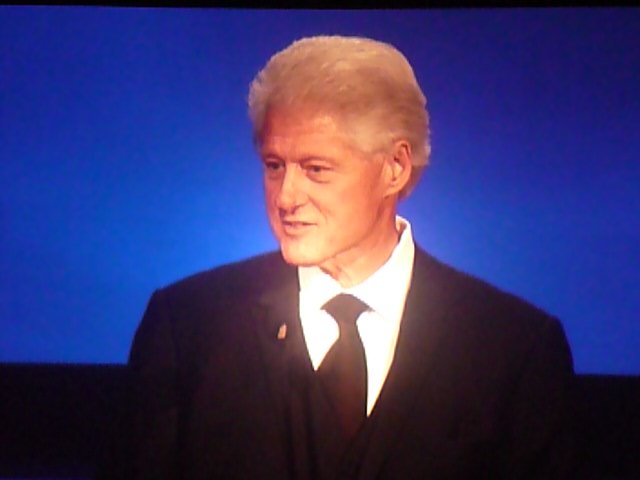 Rock Star ex president Bill Clinton has hit Hollywood with a bang. What better way to let everyone know you’re in town than to take the big long back table at Craig’s on Melrose? And that’s what he did last night, dining with eight pals and carrying a nice security force into West Hollywood’s star palace restaurant that actually has vegan offerings on the menu. (They’re really known for truffled fried chicken but we couldn’t tell if he fell off the wagon and went for this very delicious entry.)

Clinton was joined by Casey Wasserman, grandson of the late MCA Universal legend Lew Wasserman, as well as top CAA speakers agent Darnell Strom and a few guests. (Later more CAA came including chief Kevin Huvane.) Clinton sat with his back against the wall of the restaurant, facing out, and visible to anyone who had to use the facilities. Outside, paparazzi and autograph hounds milled about quietly because they were faced by about a half dozen policemen who chatted across the street.

Clinton’s not in Hollywood by coincidence with the Golden Globes ceremony tomorrow night. There’s a strong rumor he may appear on the show. He could be presenting George Clooney with the Cecil B. DeMille Award for Lifetime Achievement, or simply introducing a movie like “Selma.” There’s also a chance he will turn up tonight at Sean Penn’s annual dinner to raise money for Haiti. That dinner always attracts superstars; Clinton would be right at home.

But this is what it’s like when you arrive from the bitter cold in New York on an awards weekend in Hollywood. It’s like some kind of strange fantasy.

To wit: At dinner on Thursday night I ran into Alan Alda and wife Arlene dining at Il Piccolino with famed agent Toni Howard and her husband.

On Friday, unable to get into the overbooked AFI lunch at the Four Seasons, I wound up hanging with superstar Al Pacino, who has two movies coming out– “The Humbling”– which was killed by its distributor–and “Danny Collins.”

Later, I chatted with Randy Jackson at Chateau Marmont and ran into “Paddington” and “Harry Potter” producer David Heyman.

Then off to this very futuristic iPic movie theater in the Wilshire corridor for a reception and screening of “The Imitation Game.” Keira Knightley was the effervescent host, with a little baby bump, she was delightful. Director Morten Tyldum introduced the film to a packed house. Patrons sit in a big comfy leather seats and wait people bring food during the movie! Former New Yorker Michael Nouri was there, an old pal.

At W Magazine’s Shooting Stars event, I had a nice talk with Miley Cyrus, who wore an outsize white gown and joked that it was a tribute to Elvis Presley on his 80th birthday.

Post Clinton, I saw Selma Hayek, Scarlett Johansson, among others, scattered about. And they were all very nice.

Was it all just a fever dream? Was it jet lag? Hall’s cough drops? Or just the surreal world of Hollywood? I vote for that.