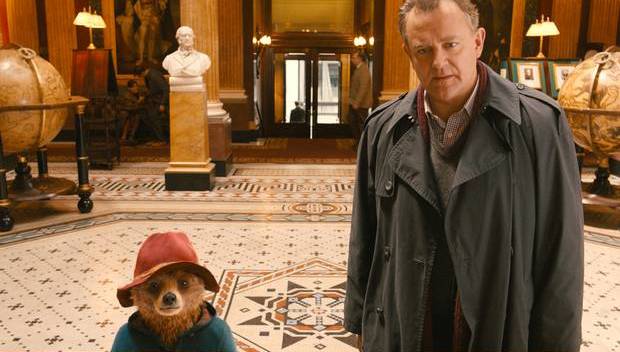 If you thought Hugh Bonneville has a hard time as Robert, Earl of Grantham in “Downton Abbey,” just wait: he’s hilarious as the eccentric Mr. Brown, head of the Brown family, in the wonderful new movie called “Paddington.” Yes, it’s based on the Paddington Bear books, and the movie is already a hit in the UK. It opens here on January 16th. I’m not sure why it didn’t get an Oscar qualifying run.

The movie is so funny, smart, and perfectly toned for kids as well as adults– it may well be the box office sleeper of the winter. It could easily have stolen audiences over Christmas as “Paddington” is about four hundred percent better than “Annie,” the only other movie suitable for kids recently. Bonneville and Sally Hawkins are simply charming and blissfully ignorant as they welcome the Bear into their home.

You’ve probably seen the trailer in which Paddington tries to teach Mr. Brown how to say his name in Bear language. It’s priceless, and consistent with all the other loony stuff involved. The whole point of “Paddington” is that no one ever stops and declares  that being a bear makes him different or less than humans. There are no judgments.

There are plenty of extended cameos, however. including Nicole Kidman’s scene stealing work as a mad scientist who wants to stuff Paddington. She’s just great, sort of channeling her character from “To Die For.” If only “Bewitched” hadn’t been such a mess of a movie– Kidman is funny.

Ben Whishaw is the voice of Paddington; he famously replaced Colin Firth, who was said to sound too old. Whishaw is a big star in the UK, known primarily here from “Skyfall.” But hold on, because this will cement him with kids. For adults, Hawkins, Bonneville, Kidman, Jim Broadbent, Julie Walters, Imelda Staunton and Peter Capaldi will do the trick. And what  fun for the very talented Bonneville to break out of “Abbey” for a change.