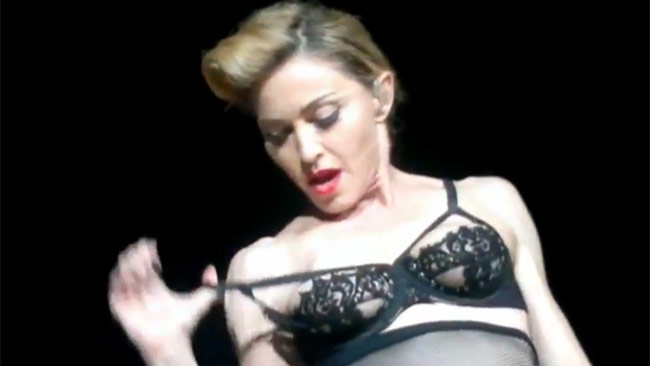 I told you last week that Madonna’s release of six new tracks to iTunes has been a sales bust. I keep getting emails from her devoted fans that she’s #11 in Hungary or #14 in Peru (I’m being a little facetious). But now this story turned up in Billboard–

\from Billboard: Madonna motors forward on Hot Dance/Electronic Songs with each of the three songs that she debuted last week. “Bitch I’m Madonna,” featuring Nicki Minaj, lands one spot short of the top 10 (14-11), while first official single “Living for Love” also leaps three rungs (16-13). “Unapologetic Bitch” jumps four notches (26-22) and “Bitch I’m Madonna” scanned 17,000 units in its first full sales week, up 33 percent. (The tracks were rush-released on Dec. 19, so their first chart-tracking week was abbreviated). By contrast, the other two tracks posted modest sales gains: “Living” is up 4 percent to 11,000, while “Unapologetic” ups by 2 percent to 8,000.

That’s a total of 36,000 copies of three tracks through January 2nd. (No mention of what happened to the other three songs.) None of the six songs is tracking on the iTunes chart of 200 top singles. Color me a little surprised. The songs were good. What isn’t good today is Madonna’s Instagram of Martin Luther King, Bob Marley and Nelson Mandela depicted as comrade “Rebel Hearts.” Is she really suggesting she’s on a par with MLK and Mandela? Or even Marley? It’s not going over well.

Since then Madonna apologized on Facebook (she can’t spell ‘neither’):

“I’m sorry
I’m not comparing my self to anyone
I’m admiring and acknowledging there Rebel Hearts
This is niether a crime or an insult or racist!
I also did it with Michael jaclson and frida khalo and marilyn monroe
Am I saying I am them
NO
I’m saying they are Rebel Hearts too.
And
I didn’t do it
My fans did
And I just re posted those photos
My fans aren’t racist either
If they put me in the same category as these other people
Thank you. I’m very flattered and I hope one day to live up to 1 100th of what those people accomplished.” – Madonna

What must young people–like 16 and below — think of Madonna if they think of her at all?