Bishop Declan Lang, chairman of the Bishops’ Conference Department of International Affairs, told The Tablet: “The publication of this atlas will confirm Israel’s belief that there exists a hostility towards their country from parts of the Arab world. It will not help to build up a spirit of trust leading to peaceful co-existence.”

On the maps, Jordan and Syria run right to the Mediterranean Sea. Tel Aviv and all other Israeli cities are gone.

A HarperCollins spokesperson said: “HarperCollins regrets the omission of the name Israel from their Collins Middle East Atlas. This product has now been removed from sale in all territories and all remaining stock will be pulped. HarperCollins sincerely apologises for this omission and for any offence caused.” 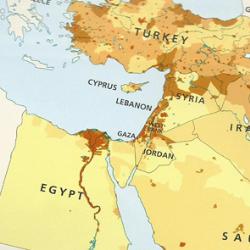