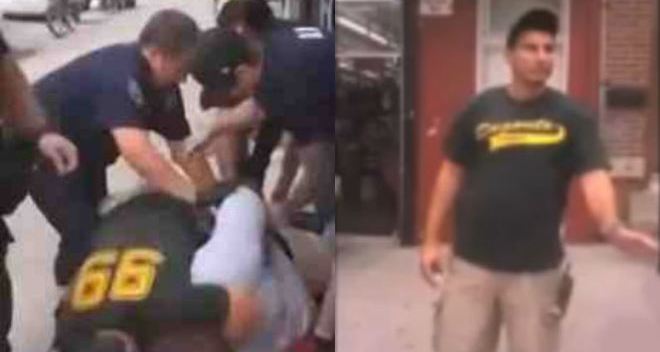 This isn’t a scoop, per se. It’s been written about before, but not much. Indeed, the New York Times has never mentioned the names Darren Collins or Tommy Rice at all since NYPD office Daniel Pantaleo killed unarmed father of six, Eric Garner, in a chokehold last July. What happened to the Times? They are not the paper of record anymore.

Pantaleo killed Garner in June. But he’s been in hot water before regarding bad arrests and black victims. In 2012, he wrongly arrested Collins and Rice. He and several other officers stopped their car on Staten Island for no reason. Then they strip searched Collins and Rice, humiliated them by playing with their genitalia.

Collins and Rice’s lawyer told the Staten Island Advance that Pantaleo lied about seeing crack and heroin in plain view on the back seat. The truth was their driver had drugs in his pocket, it was later discovered. He took a plea deal. The cases against Collins and Rice were dropped. They sued the NYPD and won $15,000 apiece.

According to the lawsuit Pantaleo and another cop “pulled down the plaintiffs’ pants and underwear, and touched and searched their genital areas, or stood by while this was done in their presence.” At the 120th precinct,  Pantaleo participated in another strip-search, and forced Collins and Rice “to remove all of their clothing, squat, cough and lift their genitals.”

Pantaleo still faces a lawsuit from Rylawn Walker, whom he arrested even though Walker contends he was doing nothing suspicious. He was caught up in a drug bust nearby and claims Pantaleo lied about him having drugs. The case against Walker was dropped.

So this is Daniel Pantaleo, who a grand jury couldn’t get a verdict against and prosecutors made sure went free. The Times has never not once reported these cases, despite the fact that the city is now teeming with protests and marches.