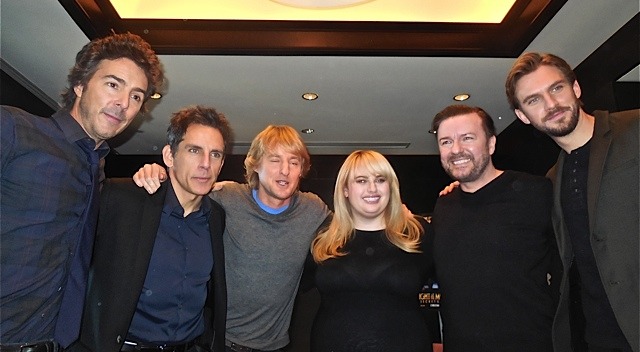 “Night at the Museum: Secret of the Tomb,” is the end of the franchise that began in 2006  and had a sequel in 2009. Director  Shawn Levy confirmed this a few days ago, and that’s fine since two cast members are now deceased (Mickey Rooney and Robin Williams).

The successful series of films transforms the New York American Museum of Natural History into a nightly dance party for Neanderthals, diorama inhabitants, dinosaurs, a Capuchin monkey, a wax Theodore Roosevelt (Robin Williams), a cowboy (Owen Wilson), an errant knight (Dan Stevens) and other denizens of the museum. In honor of the film, the museum has sleepovers occasionally for the kiddies and their parents. Ben Stiller said he’s gone with his kids and saw Martin Scorsese there.

This final caper has an undercurrent of poignancy because it is the final appearance of Robin Williams on screen. (Mickey Rooney who appears in a small role in “Night” also passed away.)

Asked about his memories of working with Robin Williams, Ben Stiller said, “I always was excited to work with Robin because I’ve always been a fan of his since I was a kid, since I was 12 or 13 and ‘Mork and Mindy’ came on, so I never got over that element working with him on any of the movies. It was just always a thrill for me. And he was amazing. He was a genius. But for me, the thing I take away working with him is that he was so kind and generous to everybody. Like every single person who would come up to him in any way, and it was pretty amazing to watch and he set a really high bar for that and he was a really genuine person.”

After the press conference I asked Levy if Robin Williams’ death affected his editing choices. Williams appears in the film in more sequences it seems than in the earlier films.

“I knew that the movie would have a layer of poignancy that was not anticipated and I didn’t want to compromise the movie because of its bitter-sweetness,” Levy told me. “Robin loved the emotionality of the franchise and Robin in particular loved the emotionality of this movie so I took out two sentences of dialogue that were a little too close to home, but the warm-hearted poignancy of these movies, and this movie in particular, it was arguably Robin’s favorite part of this movie so I was not going to compromise that, and I’m happy that audiences thus far have appreciated the love and the warmth and understand where it’s coming from, which is a very sincere love for this performer and this character he’d done.”

Fans of the film will also appreciate a hilarious cameo with Hugh Jackman. The character played by “Downton Abbey” star Dan Stevens, who plays a knight looking for the holy grail, interrupts a performance of “Camelot” and mis-hears Hugh Jackman’s name as Huge Act-Man. The idea to have Jackman appear in the scene was the director’s. “I called Hugh, and asked, ‘Would you do this cameo?’ He goes ‘yeah, yeah, okay.’ I’ll send you a script, and he said, ‘No, no, you don’t need to send anything. Just give me a date I’ll be there.’ So he showed up just as a favor but the Huge Act-man joke was Ben Stiller’s rewrite of the scene that he wasn’t even in.”