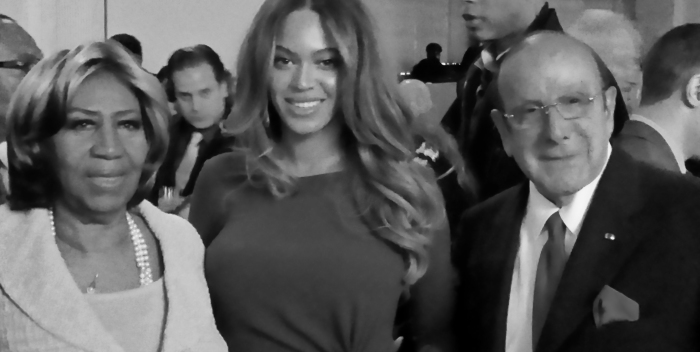 It was quite an afternoon at the Billboard Women in Music Awards. Aretha Franklin received the first ever Icon Award. And before she did, Beyonce, Taylor Swift, and Ariana Grande, among others, came to pay her some R-E-S-P-E-C-T.

Beyonce– just stunning– came right over to the Queen of Soul’s table and just about bowed down. All of 55 Wall Street had eyes on these two as Aretha– wearing a periwinkle blue Chanel suit and sporting blonde highlighted hair– graciously received her. Taylor Swift followed suit. Ariana Grande and Jesse J each called out Franklin’s name from the stage.

Meanwhile, Clive Davis came to introduce Franklin, who received a thunderous standing ovation. Aretha got a chance to hear several of today’s singers live, too, since there were many performances. The best one was Hayley from Paramore with Joy Williams on a stunning acoustic number. Jesse J, whom I’d never seen before, has an amazing voice but a really terrible hit song. Ariana Grande is sort of a Mariah Carey in waiting. She also has a big voice with a lot of potential.

Stevie Wonder, by the way, sent a video for Aretha. He rewrote the lyrics of “Until You Come Back to Me,” his song that Franklin had a massive hit on back in 1972. Very clever stuff from Stevie.