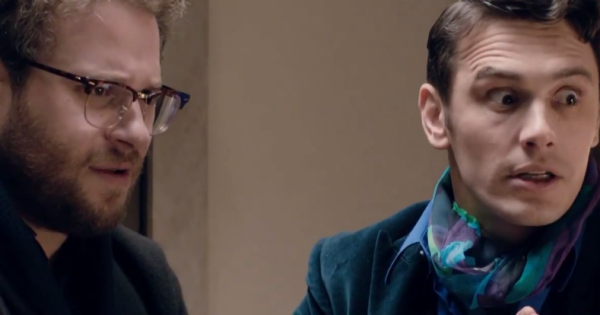 Sony finally unveiled “The Interview” last night. It opens Friday, when real reviews will run. But I got to see it, mostly out of curiosity. Could this movie be causing North Korea to hack into Sony’s computers, wreck their phone lines and steal their emails? It doesn’t seem possible. If you ask me– and no one has– it’s an inside job. But it’s great publicity for “The Interview.”

The Seth Rogen- James Franco vehicle is a hoot, of course. It’s very silly and totally improbably. The premise is that Kim Jung Un watches Franco’s syndicated celebrity show on satellite and loves it. He wants Franco’s insipid Ted Baxter like character to interview in North Korea. So off goes Dave Skylark (Franco) with his producer Aaron Rapaport (Rogen). Ultimately they come in contact with a beautiful CIA agent (Lizzy Caplan, from “Masters of Sex,” who’s just great) and nutty Kim Jung Un himself (Randall Park).

The movie is hilarious and coarse, of course. But it’s Franco’s best and least pretentious work in a long time. Dave Skylark is vain, daffy, uneducated, and totally unprepared. But he dresses impeccably. At least once he changes the pronunciation of Rapaport by silencing the ‘t’ as if it were French. He’s a slicker, smarter version of Will Ferrell’s Anchorman.

“The Interview” is also a kind of kitschy buddy movie, as if Cosby and Hope were in a MAD magazine send up of their movies in which there’s a slight suggestion of a gay relationship. But Aaron gets involved with a beautiful Korean TV producer. And Skylark flirts with the CIA agent.

The Korean stuff is tame, I think. There are some standard off putting jokes, like about cooking dogs. But there’s also a nasty Jewish joke to even it out. Mainly, “The Interview” is just a good refreshing laugh, short and to the point. It all gets wrapped up in a nice package but I won’t tell you how it ends. Suffice to say, Kim Jung Un turns out to be a huge Katy Perry fan.