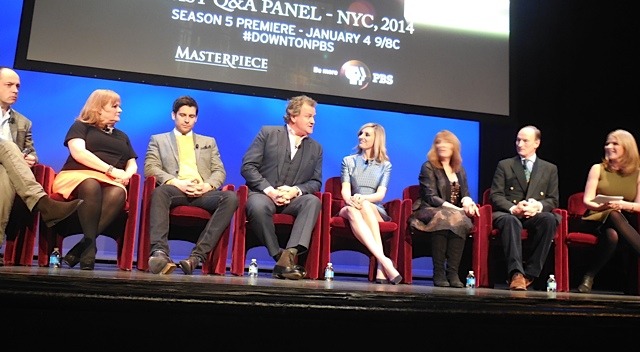 There’s nothing like trying to get a public commitment for money out of a producer in front of a crowd of fans. That’s what happened last night at the Hudson Theater when the “Downton Abbey” cast took the stage for a Q&A following the screening of 40 minutes from episode 1 of the new season.

A fan asked that since there are American characters in the show, wasn’t it time they came to New York for a visit? Producer Gareth Neame quite agreed. He said it would only cost $10 million, and maybe PBS could help them out. The rabid audience, mostly composed of well dressed women, began cheering as if they were at a Beatles concert. Neame must have gotten a couple of discouraging looks from the PBS execs who were in the room because he said, “Am I in trouble?” Indeed.

Later Hugh Bonneville, who plays clueless Robert, Earl of Grantham, told me after the Q&A: “I’m sure if PBS found $200 million to bring our budget here that would be great,” he laughed. “I think we can safely say it’s a British show with American sensibilities and we’ll keep it in Britain.”

Bush-Hager introduced the cast gushing about what a big fan of the show her mother, Laura Bush is. “My mom heard I got the screeners and asked, ‘When can I get it?’ I said, “Sorry, maybe for Christmas but for now it’s all mine,” Jenna said.

Before the Q&A the audience was treated to most of the first episode of season five, and we learned a lot but can’t divulge it. Suffice to say, Lady Mary discusses premarital sex with Anna, Lady Edith pines for her child, and Maggie Smith’s Violet starts a social chess game with Penelope Wilton’s Mrs. Crawley.

One thing we learned: the cast feels American fans are much more enthusiastic than the Brits in showing their love for the show. “Here people constantly tell you much they love,” said the dashing James-Collier. “In the UK they’ll cross the street to tell you what they don’t like.”

Afterwards audience members in the orchestra mingled with the “Downton Abbey” actors, who posed for endless selfies and acted not the least bit aristocratic or aloof.

I asked Phyllis Logan, who plays dowdy Mrs. Hughes and couldn’t look anything less like her in a glitzy gold top and sexy short skirt, her hair long and loose, — a key question: if she ever got jealous of the other actresses like Michelle Dockery who get to wear gorgeous outfits?

“I don’t really,” she told me. “I’m happy to have two outfits and maybe a third one to go out with because they’re changing their clothes constantly,” she told me of the upstairs contingent. “They have to go to dress fitting every other weak. I have two outfits that’s it.” She added, “Some of the pieces are so delicate and complex. They have to dress you and stitch you into them and stuff. No I’m happy with my two outfits,” she laughed.

Hugh Bonneville told me, “You saw a nice taste of episode one of season five. It sets up all the characters and the adventures ahead and I think you’ve got a great season ahead of you.” I told him I felt a little sorry for his character, Robert, the clueless Lord of the Manor. He seems so out of step for the future. “I don’t think anybody should feel too sorry for Robert. He always bounces back. He may be a little displaced at the moment and there’s some trouble over the horizon in the gorgeous form of Richard E. Grant but one would like to think that the ship finally corrects its steering.”

Does he have plans to see Kate and William while they’re in Manhattan? Don’t all these aristocrats hang out together? He answered just like a diplomatic Earl: “No. Strangely, I left them off my guest list off of tonight’s party. This is their first visit to New York as I understand and they’re having a few days here and they’re having a great time and it’s wonderful,” he said. “They’re the real deal and we’re just this humble shadow of things but we’re having a great time visiting as well.”