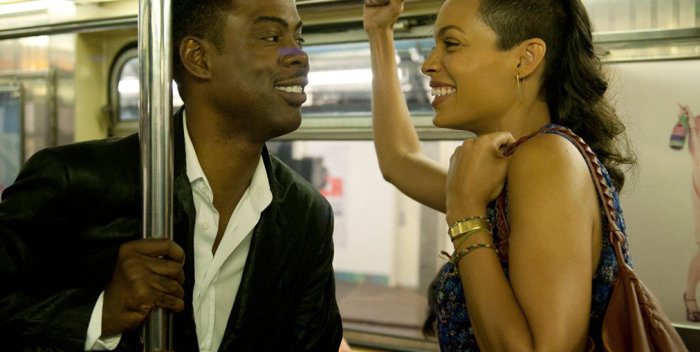 I wasn’t crazy about “Top Five” when I saw it in Toronto. For one thing, I think the press screening was early in the morning. That is not not the time for this very funny, slightly raunchy, satiric romantic comedy. But going back for a second time last night, the movie just hit me the right way. “Top Five” is probably the best laugh out loud comedy of the year, Chris Rock’s “Annie Hall.” And that’s not far off the mark. When I mentioned that to Chris last night he said, “I’ve probably seen that movie 40 times.” That, and “Bullets Over Broadway” are his favorite Woody Allen movies. (More on Chris and Woody below.)

(Note to publicists: don’t show comedies at 9am.)

Chris wrote the movie with Nelson George, and directed himself in it. He plays Andre Allen, a suddenly sober hit comic  movie star trying to take on serious parts. It’s not working. He can’t shed his popular character “Hammy the Bear,” a series of hit movies in which he wears a bear costume. In his new movie he plays a Haitian rebel who kills thousands of white people. “Uprize” is a total bomb. At the same time, Andre is scheduled to marry Erica Long, a  beautiful, self centered and talentless Kardashian like reality star played by the excellent Gabrielle Union (who pulls off the movie’s one dramatic and telling scene–all reality stars pay attention to her). That’s his “career move.”

Into this comes a New York Times reporter in the form of Rosario Dawson. She follows Andre around on the opening day of “Uprize” for an article– and a surprise twist that is completely implausible. (I won’t give it away, but they should have chosen another paper. Just as in “Birdman,” writers seem not to understand what the Times allows.) It doesn’t matter because Rosario is a modern day Annie Hall– beautiful, intelligent, articulate, literate– and empowered. She gives as good as she gets.

Dawson and Rock have so much chemistry and rhythm they alternately reminded me of Dave and Maddie on “Moonlighting.” They riff off each other in superb parries. But they are never mean– this is adult talk, and I don’t mean pornographic. It’s hip, and age appropriate. True, at the beginning “Top Five” offers a kind of orgy scene that’s hysterical followed by one gross shot. But 97% of time the movie aims for smart and sweet, and gets there. Also, there’s a not to be missed sequence with Jerry Seinfeld, Whoopi Goldberg, and Adam Sandler. (The latter, also an “SNL” alum, is the butt of another joke in the movie, too.) There’s solid and hilarious support from Ben Vereen, Leslie Jones, Sherry Shepherd, Tracy Morgan, and of course JB Smoove.

Most everyone was at the Ziegfeld premiere last night from the movie, as well as John Turturro, Robert Wuhl, Paramount’s Brad Grey (he knows he has a winner), Lorne Michaels ( who even came to the dance party later at Terminal 5, deejayed by QuestLove), Ice T and wife Coco. Seinfeld, Louis CK, and a few others walked the red carpet at the Z.

As for Chris Rock and Woody Allen: when I interviewed Woody this summer, he told me that when he married Soon Yi Previn, Chris Rock send him a wedding gift. They didn’t really know each other, though. So I asked Chris — a big Woody fan– why he did that, Chris said, “I figured he wasn’t getting a lot of wedding gifts, if you know what I mean.”

One last thing– Rosario Dawson– I mean, come on. She should be presenting at the Oscars, starring in her own movies. Let’s  get with it, Hollywood.