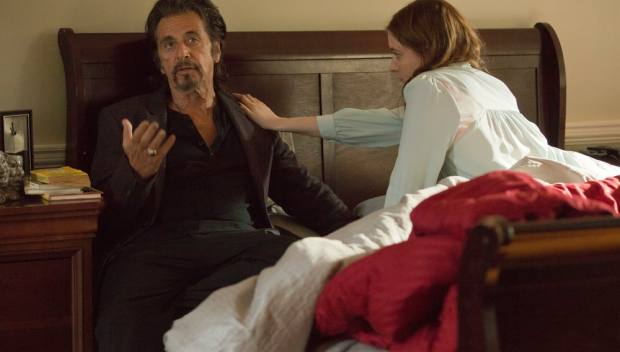 The whole world of showbiz is reeling from the death of Mike Nichols. Simply, he was beloved. A lot of his actors and friends are still adjusting to the news. At lunch today at the 21 Club for his new movie “The Humbling,”

Al Pacino told me: “Mike Nichols was the best director I ever worked with.” Pacino was really shattered by this morning’s news. Nichols directed him to several awards including an Emmy for their HBO  adaptation of “Angels in America.”

Pacino explained: “I’m really devastated by this. He was my friend, I loved him. I’m just trying to compute it.” He paused. “I’ve never met anyone as civilized. That was the epitome of what you wanted in a human being. He was the best director I ever worked with. It wasn’t necessarily the end result. Just the feeling he gave actors when they were around on set. It was the highest form of acting, being around him….There are people who when they go, you really feel it. Like Joe Papp, Sidney Lumet, Lee Strasberg, Marlon [Brando]. When they’re gone, there’s this emptiness. And it’s palpable.”

Pacino, by the way, is very much in the Oscar race this year for his phenomenal performance in Barry Levinson’s “The Humbling.” Millennium is releasing the comedy with Pacino, Greta Gerwig, and Nina Arianda in Los Angeles for one week in mid December to qualify for the Academy Awards. The movie’s full release is mid January. I am hopeful that Bill Lee, Avi Lerner, and Mark Gill of Millennium do a December week in New York too. It’s Pacino’s best work in years. The film itself is terrific. Levinson is an Oscar winning director. Pacino is a double Oscar winner. Nina Arianda has a Tony Award. “The Humbling” may be the dark horse of this Oscar season!

I was enlisted to interview Pacino and Levinson today at the ’21’ lunch and it was a lot of fun. I asked if either had met Philip Roth, the famed author of “The Humbling.” Pacino said they were introduced. Roth’s reaction? “He said, I know who you are.” Al recalled. Roth didn’t mention liking “The Godfather” or any of Pacino’s classic films. “It ended there,” Pacino said, getting a big laugh from the crowd that included Regis and Joy Philbin, James Toback, Lawrence O’Donnell, Rosanna Scotto, Dan Hedaya, and Alan Alda.