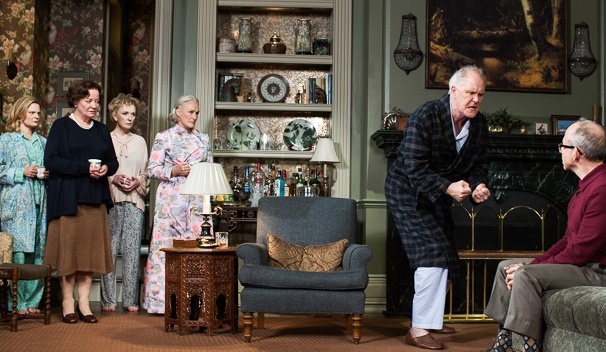 I bought a ticket to see Glenn Close, John Lithgow, Bob Balaban, Martha Plimpton and Lindsay Duncan in ” A Delicate Balance.” It cost $225, so I still haven’t gotten over that. My intention was to review the play, which opens tonight on Broadway. But what happened made it impossible. Lax producers, publicist and theater managers allowed a woman– albeit a courageous one– in a motorized wheelchair to sit up front around the fifth row. It was an impossible situation. The woman’s breathing apparatus echoed through the theater, loudly.

It sounded at first like someone was snoring, and it was being broadcast over the PA system. The actors, who did not know what was going on, struggled to be heard over the machine. This is a two and a half hour Edward Albee masterpiece that requires focused attention. And what can you do? Complain? It was like an episode of “Curb Your Enthusiasm.” It might have been funny but it was the performance before opening night, many critics and press were there, as well as some well known actors. It was a mess. No one was in charge.

On top of that,  a woman’s phone went off in Act 2, and she answered. Plus an adult man across the aisle from me was playing a video game with his iPad during the breaks. What has happened to this world? The guy reminded me of the fellow who makes a bouquet of a shredded TV Guide for Elaine on “Seinfeld.”

Through it all the cast maintained a very delicate balance. The play opens tonight but I will tell you now that you can’t miss these performances– including British actress Clare Higgins. Albee’s play is a masterpiece and this group conveys it very well. There is some shaky direction by Pam McKinnon, but again, it was hard to really judge because of the racket in the theater. (We felt so bad for this woman. It was maybe the worst experience I’ve ever had in the theater.)

Albee’s play about family, friendship, love, and loss is devastating. “Balance” maintains its own balance as a conventional drawing room comedy of manners that becomes an existential jigsaw puzzle.  Close and Lithgow have an amazing rapport, as do Balaban and Higgins.  Martha Plimpton gives it all heft as the voice of reason. The amazing Lindsay Duncan is there for upheaval, and for playing the accordion. I wish she did more on Broadway.

A trivia note: Close and Duncan each have played the same character from another work– The Marquise de Merteuil. Duncan played it on Broadway in the famous 1988 “Les Liaisons Dangereuses.” Then Close played her in the movie version, “Dangerous Liaisons.”  Close told me last night after the show that if the Broadway show had been extended, she was set to replace Duncan. “Now we’re playing sisters in the same play,” she observed, with a big grin.

All’s well that ends well– a spontaneous party followed at Bar Centrale, where Close and Balaban dined with producer Bonnie Timmerman and British director Adrian Noble. They had a  “Damages” reunion with Rose Byrne, currently on Broadway in “You Can’t Take it With You” and the very funny Stephen Merchant (he’s on HBO this weekend). Matthew Broderick and Stockard Channing came over from the hilarious “It’s Only a Play.” Everyone had deviled eggs and commiserated about a long Wednesday– matinee day.

Someone at the Golden Theater had better get it together for opening night tonight, that’s for sure.