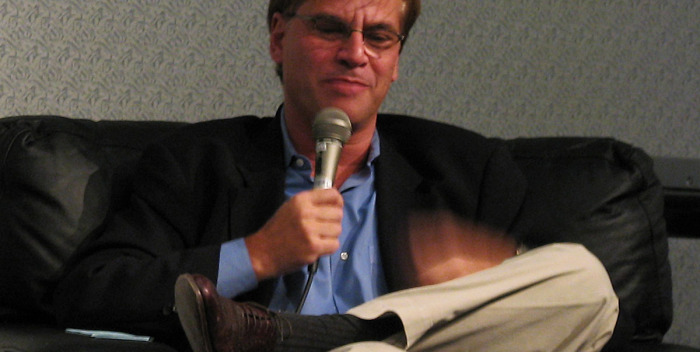 Aaron Sorkin stopped by HBO offices on Sixth Avenue last night for an interview after a private screening of episode two of the third and final season of “The Newsroom” for BAFTA members and their guests, many of whom were former newspeople.

The 53-year-old creator of “The West Wing” (along with “Studio 60 on the Sunset Strip” and “Sports Night”) also wrote “Moneyball” and won the Oscar for his screenplay for “The Social Network” about Facebook founder Mark Zuckerberg mogul. Next up is a Steve Jobs biopic that Christian Bale just exited with rumors Michael Fassbender will take over the lead role.

Sorkin started the interview by talking about how “The Newsroom” has been slammed by the media.

“The show has been very polarizing and I’ve got plenty of experience with negative reviews,” Sorkin noted. “But this is different because there are a number of critics, who are journalists, in their way” – the audience laughed – “who believe that what I’m doing is showing the professionals how it should have been done if only I’d been in charge. ‘Here is the right way to do news and I’m leveraging hindsight into heroism,’ which I assure you is not what I’m doing and in fact it’s not even what happens on the show. But they’re deeply, very insulted by the show.”

Sorkin went on to say the final season is the best, that he hadn’t been satisfied with the first two seasons. “This was the first season where I didn’t feel like had a pebble in my shoe writing the show.” He added, “The criticism I just mentioned, that I’m trying to show the pros how to do it, that’s silliness. There’s legitimate criticism of the show. I could write a negative review of the show if I wanted,” he went on to say.”

“After the second season I was not going to bring the show back for a third, for that reason and there were other commitments” Sorkin said. Richard Plepler, chairman and CEO of HBO, convinced him to come back. “I don’t think he wanted me to leave the show like that.”

How did he finally get into the rhythm of writing the show? He compared it to golf, which he doesn’t play, where a golfer “just keeps swinging” until he gets it right. “You just keep writing and you eventually find your groove but when you’re going through it, boy, there’s isn’t a more miserable feeling unless something wrong with your child. There isn’t a more miserable feeling in the world than that.”

As for accusations of his liberal bias, Sorkin said, “I have no political agenda, nor do I have much political sophistication at all,” he said. “ I’m not an activist. There are just great stories that suit my writing style, very romantic, very idealistic style.”

Sorkin went on to talk about newsroom dilemmas, like being first out with the news. “I’ve never understood the virtue of being two minutes earlier than someone else.I think you get bragging rights, that’s about it. I don’t think there’s a citizen who cares. And citizen journalism, those are the two scariest words I know,” he laughed. “

In the first episode of the final season the focus was on how the news channels got the Boston marathon bombing  wrong. The reported the Boston police department had a suspect in custody who turned out to be innocent. “Listen, obviously getting it right is incredibly important.” He added, “ I was saddened to see the next day, the day after that, in the couple days that followed the season premiere on Sunday, headlines saying “Newsroom Blasts (CNNY reporter) John King.” (This was the headline in the Daily Beast following the season premiere.)

“That was exactly the opposite of what my intention was,” he explained.

As for how he would fix Nightly News? “It would go out of business in a couple of weeks,” he said if they went by his plan, which would include gathering journalists and asking them to decide what the top story is to tell viewers with a total disregard for ratings. “I don’t want anybody talking about ratings, thinking about ratings,” he said. “My solution would bankrupt an organization.”

Sorkin was asked if he ever wanted to be a journalist and he said no, that what drew him to lawyers, politicians and journalists was the good conversations. “I grew up in that,” he said. “Everyone in my family is smarter than I am. All of my friends that I grew up with are smarter than I am. And so just growing up I really liked the sound of smart people arguing with each other and I wanted to imitate that sound and I kind of created the narrative for it.”

As for upcoming Steve Jobs biopic, which has been much in the news, “I’ve never met Steve Jobs in my life,” Sorkin said. “He called me three times. The first time was just out of the blue to say something nice about something I did that he liked. The second time he asked me to come up, write a couple Pixar episodes,” which never materialized. The last time he called was to help him with his Stanford commencement address in 2005. “I said of course…you tell me what you want to say and I’ll tell you how, so I would really little more than give him confidence that it was a great speech.”

About the Jobs film he added, “How the person actually walked and talked becomes not at all important to me. Any time you see a movie that begins with the words the following is a real story just remember that you’re looking at a painting and not a photograph.”