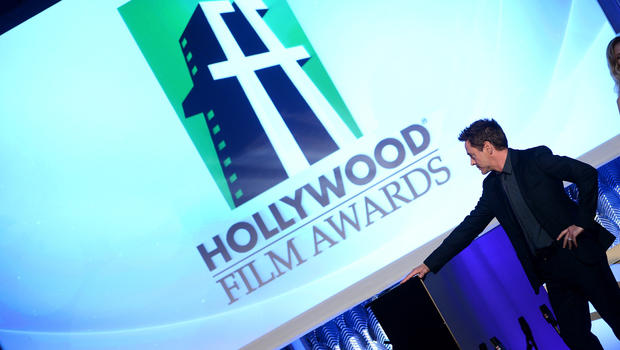 UPDATE: First a correction: Dick Clark Prods. doesn’t own the People’s Choice Awards. And second: Dick Clark Productions is now owned by the same company as the Hollywood Reporter. I look forward to their coverage of DCP events.

EARLIER: This Friday, we get a new awards show on TV. It’s the Hollywood Film Awards, brainchild of former Hollywood Film Festival creator Carlos Abreu. Last year he sold the festival and made a deal for the awards with Dick Clark Productions. That company produces what you might call the ‘lesser’ awards of the season– the Golden Globes, the American Music Awards, the People’s Choice Awards. They aren’t exactly Oscars, Emmys or Grammys, but they’re useful for bringing in ad money and movie stars to the networks.

How many people decide who get the Hollywood Film Awards? Twelve. 12. A dozen. Their names are kept secret but I am assured none of them come from movie studios. Still, everyone knows everyone in the film world. It’s hard to be objective, to say the least.

The Hollywood Awards, an insider tells me, are supposed to be along the lines of the Kennedy Center Honors. They are really tributes. Nine of the “below the line” tech awards have already been announced. All the other honorees know who they are already. The audience is in the dark, but the players are not.

The categories are as follows. You can sort of figure it out. Angelina Jolie will get the director award. Breakout actor will be O’Connell, star of her movie. Maybe Redmayne and Cumberbatch will tie for Best Actor, Reese and Amy Adams will tie for Best Actress. Mike Myers will get Doc award for “Supermensch.” It will just be a big party on a Friday night, and why not? As a friend of mine says, it could be worse.