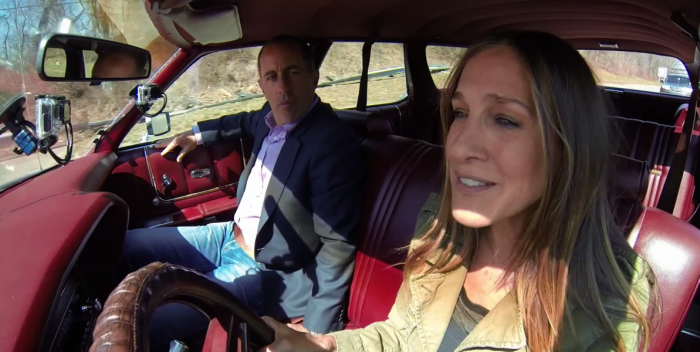 Jerry Seinfeld says he thinks he’s on Autism spectrum. Brian Williams did an interview with him, maybe for NBC Nightly News (I’m not sure and the NBC website doesn’t help–it’s a disaster). The Williams piece was to promote “Comedians in Cars Getting Coffee,” Seinfeld’s brilliant web series that starts again this week.

Jerry’s most revealing comment maybe ever in his life comes during this conversation. He tells Williams he thinks he’s on the Autism spectrum. Of course, he’s highly functional, but this is all without any testing. It may be a form of Asperger’s Syndrome. Or, as they used to say, he’s socially awkward.

He may be right. In person, Jerry is extremely polite. He also seems distracted. That’s the best way of putting it. When you’re talking to him, it always feels like he’s doing something else in his head.

Of course, I’ve never forgotten standing outside the Carlton Hotel in Cannes as Jerry propelled himself on a zip line across the Croisette dressing in a bee costume for “The Bee Movie.” Amazing.

Seinfeld also tells Williams that he tried to get Starbucks as a sponsor for “Comedians in Cars Getting Coffee.” He called Howard Schultz personally and sent him the first 10 episodes. Schultz, he says, didn’t get it. “He didn’t see the connection.” Starbucks stockholders are gasping as they hear this. Acura picked up the show and has probably sold a lot of cars because of it. Sounds like Schultz may be “on the spectrum.”

Anyway, I love Jerry. He’s unfailingly loyal. He made a little film this season of him going to see the head of Crackle, the web company that produces “Comedians.” He’s got Michael Richards, who played Kramer, as the boss, and Jerry’s best friend, “Letters from a Nut” writer Barry Marder, playing a cop. The whole thing reads like a letter from a nut, very Marderish. But that’s Jerry.