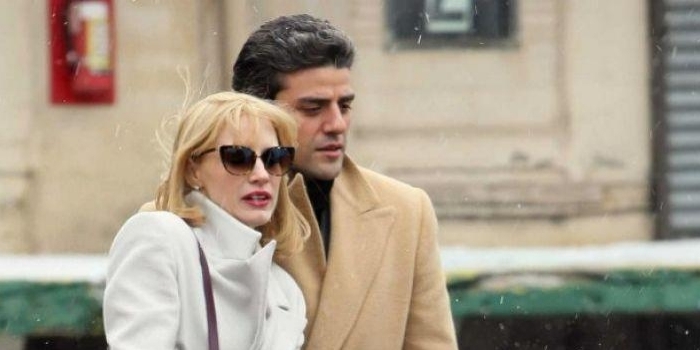 I don’t know how it will work for Jessica Chastain this year. Can she be nominated for everything? Eleanor Rigby, Interstellar, and A Most Violent Year? (Were there others? Throw them in.) Chastain is one of the few actors who you know all the hype is right on. She’s got it in hand. In JC Chandor’s excellent “Violent Year” she’s startingly simply because she’s not the good girl. She’s really good at being a bad girl, a sort of Carmela Soprano in training.

And then here’s Oscar Isaac, Al Pacino-esque in the best possible way as Abel Morales, circa 1981, in over his head as a wanna Tony Soprano. He keeps trying to get out but they just keep pulling him back in. Oscar finally made his name in “Inside Llewyn Davis,” but this performance really stands him in good stead. He’s a movie star.

“A Most Violent Year” is Chandor’s movie but it’s a tribute to Sidney Lumet and “Prince of the City” and “Serpico” and so on. Abel’s been trying to run a clean (legal) oil business. But his wife is cooking the books. His enemies are stealing his trucks and his oil as if they were stage coach robberies on the 59th St. Bridge. Alessandro Nivola is an oily business partner (he’s great, too). Albert Brooks is his long suffering consigliere.

This is the year of Lumet. I hope he’s watching from heaven. Everyone wants to make a Sidney Lumet movie. Chandor has, with a touch of James Gray. The film itself has some small problems. But you overlook them because there’s momentum to the story and the people —  however morally flawed—are appealing. I hope distributor A24 puts some oomph into campaigns for Chastain and Isaac. They’re revelatory here.