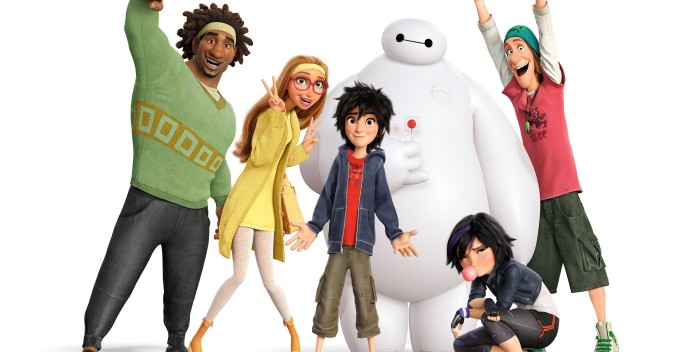 This is a major box office weekend: Christopher Nolan’s three hour space epic “Interstellar” cost $200 million and is supported by two major studios– Paramount and Warner Bros. It stars four Oscar winners (McConaughey. Hathaway, Burtsyn and someone else I’m not supposed to mention), as well as a nominee (Chastain). It’s made by a famed director (Nolan). “Interstellar” is breathtaking and confounding. Everyone has high hopes for it. But it’s not a slam dunk. Rotten Tomatoes gives it a 71% from critics.

And then there’s “Big Hero 6” from Disney Animation Studios based on a little known Marvel comic and looking like a Pixar movie. It’s animated. The voices are not really famous. Scott Adsit, very genial from “30 Rock”  as a minor character, is the voice of BeyMax, an expressionless sort of Casper the Ghost made of white vinyl and stuffed with electronics. Ryan Potter, a total unknown, is Hiro, the hero (get it?). The film has an 87% on Rotten Tomatoes.

In a strange coincidence, the last 20 minutes or so of “Big Hero 6” sums up the “Interstellar” plot maybe unintentionally. But if you see both movies, it’s clear. “Big Hero 6” is half the length of “Interstellar” and a lot of fun. It’s perfect for parents who want to take their kids because it’s written on a couple of levels. It’s very very clever.

Of course, the spoiler this weekend is James Marsh’s “The Theory of Everything.” Oscar worthy performances by Eddie Redmayne and Felicity Jones as Stephen Hawking and his first wife, Jane, offset some of the film’s deficiencies. It’s a must-see. Focus Features keeps sending me emails about private screenings they’ve had with celebrities. The tone is “We had this event and you weren’t good enough to be invited.” They are hilarious. But I’m going to ignore this and push on for these wonderful actors.