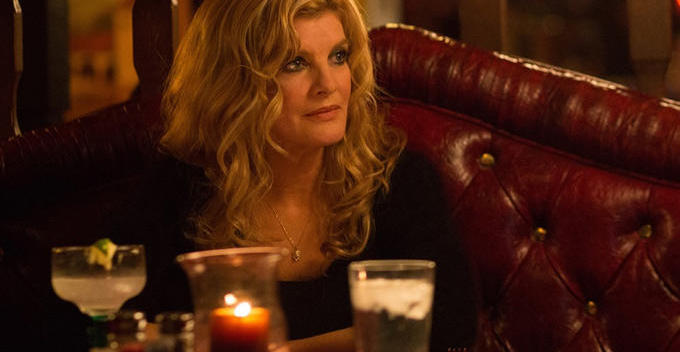 I am happy to report that Rene Russo is back in the movies! She co-stars this week in her husband Dan Gilroy’s exceellent film “Nightcrawler” with Jake Gyllenhaal. Rene took five year off after working since age 9. Some people– like me!– thought it was because of something she told a TV show recently about being “bi-polar.”

“Oh no!” Russo said at the Stone Rose (Time Warner Center) after party for “Nightcrawler” this week. She laughed. “I  think I was always bi-polar, or something! That’s not the reason I took time off! ” Her off handed remark got a lot of headlines. But Russo seems about as grounded as a person could be after making a lot of movies with Mel Gibson (in his pre-crazy days), Pierce Brosnan, Kevin Costner, Dennis Quaid, Al Pacino– the list of leading men goes on and on. Russo is always the number 1 choice to play “the wife” in big budget movies.

“Nightcrawlers” should fix that. Rene plays a local TV news producer in LA with a voracious appetite for ratings, headlines, and personal enjoyment. In one scene, she kicks the LAPD out of her station (improbably but fun to watch). She flirts shamelessly with Gyllenhaal, who’s getting Oscar buzz for his role as a freelance cameraman who scours LA at night looking for sensational stories.

So what’s Russo been doing? “Gardening,” she says. “And being with my daughter. It was time.” Now she’s back, if anyone wants to know . She’s got one film in the can, and she’s starring in Nancy Meyers’ “The Intern” next. According to the imdb, she’s 60. But 60 is the new 40 in Hollywood. Rene is a fox. And she’s had no plastic surgery. (Maybe the gardening is good for you!)

PS “Nightcrawler” is one of my favorite films of this year. And it’s a Gilroy family affair. Dan wrote and directed, Tony — best known for writing three “Bourne” movies and “Michael Clayton” — is a producer on this one, and brother John is the film editor! By the way, superstar cinematographer Robert Elswit makes “Nightcrawler” look pretty damn sumptuous.