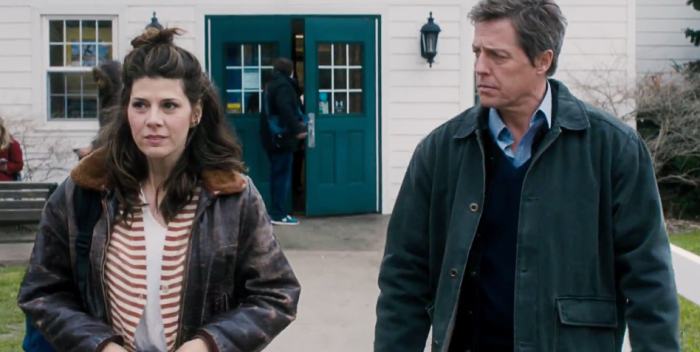 Everything about “The Rewrite” sounds like it would work– if it had been released in 1998. Hugh Grant plays  a failed screenwriter who takes a college teaching job as a writing instructor in Binghamton, NY. Crusty “Juno”  stars Allison Janney and J.K. Simmons are his kindly superiors. Marisa Tomei, a two time Oscar nominee, is his love interest. Marc Lawrence, capable sitcom movie maker (“Miss Congeniality,” “Words and Music”) is the writer-director. What could go wrong?

Well, we might be looking for “The Rewrite” on VOD very shortly. The rom com has no US distributor. It does have some foreign distributors, so it has started rolling out abroad. In the UK it  took in a paltry $500K its first week ending October 10. A few other lucky countries will follow. But in the US, there’s no sign of it.

On Rotten Tomatoes, “The Rewrite” has a decent 71%. From its trailer it looks funny, but also like a great movie of the week. Castle Rock, Rob Reiner’s once-powerhouse company, made it. They’re probably still dealing with the financial disaster of Reiner’s summer flop “And So it Goes” ($30 mil budget, $4 mil box office).

The 90s are really over. Grant has just one more movie in the can, playing Mr. Waverly in the big screen version of “The Man from UNCLE.”  We won’t see that until next year. It was moved from its January release date. Grant says he may be giving up acting. I don’t get it. If he really wanted to revive his career and make good  films, he could. He obviously doesn’t care. As for Marisa Tomei, like George Costanza I support her 100%! She can do no wrong!