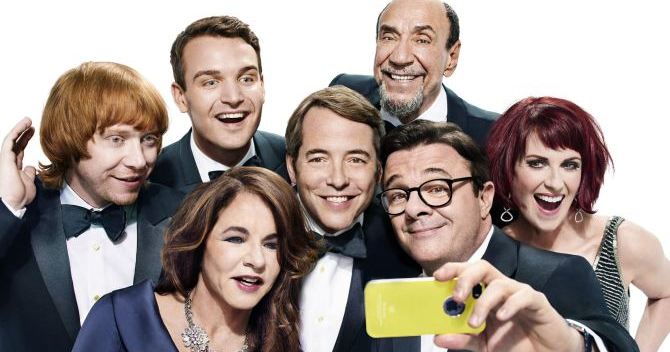 First of all, with such huge box office — $1.2 million a week— before the show even opened, “It’s Only a Play” was the subject of much gossip for weeks. It must be bad. I heard it wasn’t very good. This was the buzz.

The original version, off Broadway in 1986, was not a hit. It was slight, and it closed despite a great cast that included Christine Baranski, James Coco, and Mark Blum.

Terrence McNally has totally overhauled his play, made it current and about 1,000 times funnier. It’s so funny that when it was winding toward a conclusion, I didn’t want it to stop. McNally took a just for it attitude, and has said every single thing every one in the theater is thinking right now in 2014. Out loud.

Jack O’Brien expertly puts this ensemble through its paces. Matthew Broderick is now the playwright at an opening night party waiting for his reviews. Nathan Lane is his best friend, a TV star who once toiled on the stage is now in a perpetual sweat about his career. (He’s the linchpin in this nutty spectacle, and of course, devastating.) Stockard Channing is the star of Broderick’s play. Megan Mullally is the sole producer, the wealthy wife of a rich guy who dabbles in theater. Rupert Grint of “Harry Potter” fame makes a terrific Broadway debut as the bad boy British director. (I told him he reminded me of Malcolm McLaren.) F. Murray Abraham is outstanding as the cleverly nasty theater critic who longs to be a playwright himself. Micah Stock makes his own debut as the deadpan coat check guy at the after party (a new character invented for this iteration).

This group, in a word, is hilarious. The jokes they tell are all inside ones, but if you’ve been to the theater or know anything about celebrities, it’s easy to follow along. Everyone and everything is skewered by this group with laser-like comic timing. I did keep thinking that this was the funniest thing I’d seen since “Vanya and Sonya and Masha and Spike.” And that’s saying a lot.

This is satire at its highest dudgeon of course. Liza Minnelli and Faye Dunaway each get hit hard. Daniel Radcliffe is represented by a little boy’s peacoat. Shia LaBeouf gets arrested off stage at the big after party. Alec Baldwin kicks someone when they’re on the ground.

Many current shows are lampooned. “Hasn’t Rock of Ages closed by now?” someone asks. There are jokes about the umpteenth revival of “Les Miz.”  Much fun is had at the expense of British imports, Disney musicals, and the changing landscape of Broadway. There are some great speeches about theater and art– mostly thrown to Broderick, who delivers them with a beautifully deadpan composure.

But the jokes never stop and neither do the laughs. The sarcastic stuff goes to Stockard Channing, who delivers put downs and rueful observations with stunning deftness. Abraham is a hoot as the caustic theater reviewer, a combination of Rex Reed and John Simon with a penchant for ad hominen attacks. Mullally has her most substantial role yet on Broadway and pulls it off with aplomb.

The fun of opening night was of course, all the “meta” stuff going on–jokes about real life people who were also in the audience, like Tommy Tune, or Bob Wankel, head of the Shubert Organization. Lane, as James Wicker, name checks “Nathan Lane” and really carries on about Harvey Fierstein. Rita Moreno and Chita Rivera are confused for each other. Lady Gaga checks a coat made of glass globes.

There were so many celebrities and A listers in the crowd that the show started a half hour late. And the #1 celeb was Sarah Jessica Parker, aka Mrs. Matthew Broderick. who wore a diaphanous white designer dress, looked like a million bucks and was just as nice as pie to everyone she encountered. She also sat front and center and rooted Matthew on.

This is a limited run through mid January. But if the Shuberts can move Helen Mirren in “The Audience” to another theater, “It’s Only a Play” may stay a bit longer. Considering it is totally sold out, that’s a good idea.

PS New York Times theater critic Ben Brantley is an unseen but main character in “It’s Only a Play.” In real life, he reviews the play today in the Times. A little weird, but uncanny in its evaluation of him. Heck, all the world’s a play…