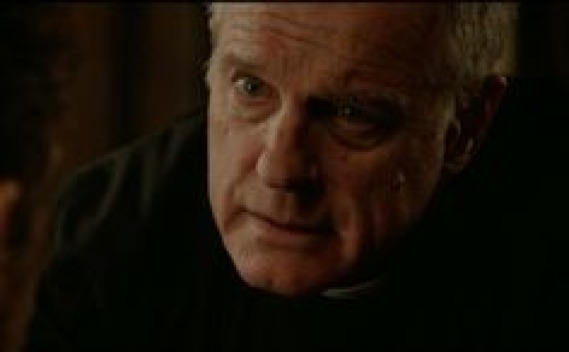 Unless you’re living under a rock you know by now that “7th Heaven” actor Stephen Collins is in a lot of trouble. He is heard in an audio tape procured by TMZ taking about having molested extremely underage girls a few years ago. The tapes surfaced, it seems, after he confessed to his wife, actress Faye Grant. She immediately filed for divorce. She also moved in court to make sure she would not be financially liable if Collins’ alleged victims sued him.

Those court papers describe Collins’ confession in front of their therapist. Now this private business has– as if by magic because Grant denies– all come spilling out. Collins has resigned from the SAG board and he’s been fired by two TV hows.

Collins, of course, was famous for playing a pastor on “Seventh Heaven” for a long, long time. But that’s not his only clerical work on film. He recently made a short film called “Penance” in which he plays a priest who hears confession. The short film was made in one day last summer by Emmy winning stunt coordinator Jeff Wolfe. On the imdb it’s described thusly: “A man makes the decision to cleanse his inner demons, revealing a buried past that begs the question… can we ever truly find forgiveness? And just how far will one go to get it…”
And another precis: “David Lyons (Safe Haven, Revolution) plays Thomas Walker, a man hounded by personal demons and inner turmoil who has lived long enough with the scars of his past. Stephen Collins (7Th Heaven, Blood Diamond) is the Priest he visits to clear his conscience and discover exactly what it means to find forgiveness… or to give it.”

There are no coincidences in this world, are there?

Collins talked about in on YouTube. It starts at 2:20