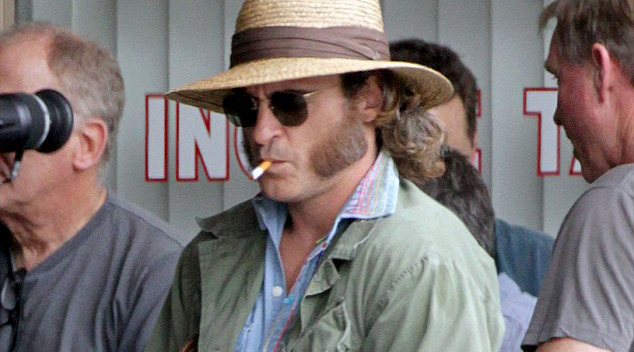 The press screening for Paul Thomas Anderson’s “Inherent Vice” this morning brought out unexpected stars– Patti Smith and Ralph Fiennes came together although no one can figure how they know each other. There was a massive line at the Walter Reade Theater– the biggest anyone had seen in a long long time considering the steady rain and the fact that it was Yom Kippur, say my spies. (Yours truly was in shul.)

The reviews are decidedly mixed for this New York Film Festival feature starring Joaquin Phoenix and Josh Brolin. Let’s not forget this movie is based on the odd later work of the very much alive and hiding Thomas Pynchon.

Says one astute observer: “I spoke to three other journalists and we all thought Paul Thomas Anderson’s film is a mess. It has some of the most hilarious stuff I’ve seen but after a while the shtick runs dry.  Joaquin does it over and over, the same expressions, same sight gags, and after a while it gets boring. The whole thing doesn’t jell. No Academy Award nomination for him in this mess.”

This didn’t help: “After the screening, only a few people clapped. It wasn’t an enthusiastic reception to the film and the fact that most of us got shut out of the press conference pissed us off.”

The celeb story: “Ralph Fiennes and Patti Smith showed up at Elinor Bunin Theater where they  mistakenly thought they had to pick up tickets for tonight’s premiere of “Inherent Vice.” A volunteer sent them over to the Alice Tully box office and afterwards she gushed to me she got Patti’s autograph.”

The finale, for now: “The critics like Manohla [Dargis of the New York Times] will love it. It has some of the funniest scenes I have ever seen but lots of repetition and confusing plot. Too much to pack into two hours but definitely some of the critics will love it.”

More later and tomorrow. I am so glad I missed this scene today. Personally, I am looking forward to “Inherent Vice.”