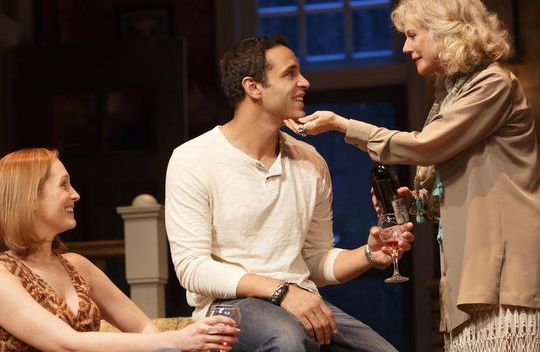 There was an excellent star turnout last night to see Blythe Danner in “The Country House.” Her daughter, Gwyneth Paltrow, an actress, hit the red carpet, along with Neil Patrick Harris, Michele Lee, Zachary Quinto, Jennifer Wesfeldt (sans Jon Hamm, who took the night off), Tracie Thoms, and Margaret Colin. Danner’s famous photographer daughter-in-law Taryn Simon was also there, but her husband, Jake Paltrow, was in Spain on a film shoot.

The play, by the otherwise very talented Donald Margulies, is an erector set of cliches that some reviewers thought echoed Chekhov. But unlike the great Chris Durang comedy “Vanya and Sonya et al,” this effort doesn’t know what it wants to be. So it is exasperating.The first act has lots of laughs. The second act devolves into a soap opera-ish sort of melodrama kept afloat by the actors’ hard work and good intentions.

But the cast is superb– you could watch Blythe Danner read the phone book. She is worth every penny of the ticket price. Also, the lighting is exceptional by Peter Kaczorowski, which helps a lot.

By the way I did ask Neil Patrick Harris about “Finding Neverland.”  He said, “I’m too old! I’m 41 now!” This seems impossible, but I believe him.