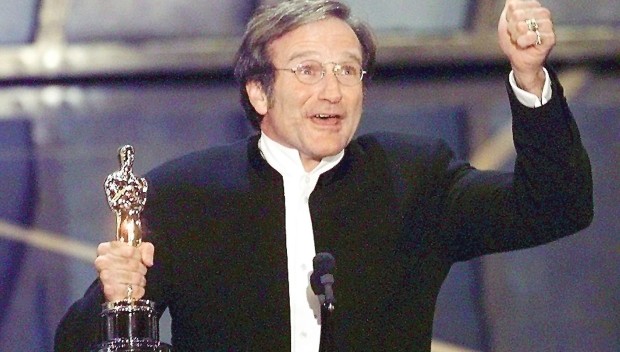 “Monty Python” star and veteran director Terry Gilliam turned up at the Tribeca Grand Hotel Thursday afternoon to promote “The Zero Theorem,” which opened Friday. After the press conference I asked about memories he had of Robin Williams, who starred in his 1992 film, “The Fisher King.”

“I had to watch Fisher King two weeks ago cause the Criterion Collection are doing a Blu-ray version of it and I had to look at it for technical reasons,” he told me. “What was interesting about watching the film was how – because Robin’s death has depressed me ever since — but watching the film is almost cathartic because he’s so alive in the film and it’s Robin. It’s not Robin playing a character. What you see on film is the full panoply of Robin, the joy, the madness, the torment. It’s all there on the film. I think it’s the only film that really captures who Robin really was in real life. I really enjoyed it. I came out of it with a huge smile on my face. Yeah, Rob! You’re still alive!” Gilliam cracked himself up.

“The Zero Theorem,” is a kooky science fiction epic set in an absurdist and candy-colored not-too-distant future, delves into the familiar territory of the director’s other movies, “Brazil,” “Time Bandits” and “12 Monkeys.” Christoph Waltz stars as Qohen Leth, an eccentric and reclusive computer savant, who lives in a burnt out monastery at which he also prefers to work. Management (Matt Damon wearing zany suits) delegates his teenage computer whiz kid son, Bob (Lucas Hedges, son of director Peter) to help Qohen work on a mysterious project that will uncover the meaning of existence – or the lack of one. Bob ends up bringing out Qohen’s human side and becomes a sort of surrogate son.

The script, by first time screenwriter Pat Rushin, was first offered to Gilliam in 2008, but he turned it down to work on the more personal films “The Imaginarium of Dr. Parnassus” and “The Man Who Killed Don Quixote.” Gilliam has famously attempted to make Don Quixote for the last quarter century. The film has continued to be a sort of obsession to the director. (His doomed attempt to bring the film to the screen was the subject of “Lost in La Mancha,” a 2002 documentary directed by Keith Fulton and Louis Pepe.)

In June 2012, after Don Quixote hit yet more snags to get off the ground, Gilliam looked around for a job.

“After Parnassus I worked for a year and a half on Quixote. It fell apart. I just wanted to work,” Gilliam told journalists. “I said, what’s out there? Anybody got a job for me?” Gilliam laughed. And my agent said, what about Zero Theorem? You mean they’re still interested? Okay, yes. Let’s go. The difference is your budget is now 8 and half.” Gillian cackled again. “Actually it was 7 and a half. I got it up to 8 and a half.”

The 73-year-old founding member of Monty Python cracked himself and journalists up every few minutes with his unfiltered comments. The budget reduction, which he credited to the new technology unavailable when he was first offered the script, and that they moved the shoot from London to Bucharest, ended up being a plus.

“Because the cheaper you can make a film the more you can say exactly what you want to say the way you want to say it and not have to listen to a lot of corporate dickheads telling you what the public really wants.”

Gilliam insisted that his film, a futuristic vision of the world set in London, was not dystopian. “This is Utopia,” he laughed. “It’s a wonderful world! Everybody is out there! They’re dressed smartly. They’ve got a lot of color. They’re bouncing around all over the place. Cars are zipping back and forth. Shopping is 24 hours a day seven days a week. What more do you want?” The only dystopian element is the guy unhappy in this element, Waltz’s character.“

Then, contradicting what he just said, the “Brazil” director added, “My tendency in films is to see the less good things in society and the world we live in because at least those are things you can criticize and possibly comment on and possibly might change something in some small way.” He cackled, “Not likely. But we can pretend to have some potency in the ability to help change the world. He’s got to believe things like this,” Gilliam pointed to Hedges. “He’s got a whole life ahead of him. I’m old. I know the truth,” Gilliam cracked up again.

The futuristic vision of the world in Zero is not so far off the director noted.

“For me coming to New York it’s like Qohen going out of his front door. I mean it’s just like, ‘WHAT!” Fuck it! We’re overwhelmed with stuff (in London) but it’s provincial and pissy small compared to walking into Times Square. What is this about? And where do we fit into it? Are we just these little dots that connect around the way. I mean are we just becoming social insects like worker bees? And our job is to keep treating and connecting, spreading those pheromones, that sort of go through the ether?”

Society was too hung up on how everyone else feels and being safe. “Nobody really has to have their individual opinion. People sort of are constantly communicating. Should I say that? Is that right? Have I gone too far? Have I offended? Am I rude? All these words keep coming up. My adage was, fuck this! People have got to start being individual and offensive. I’m obsessed about offending people cause you get a discussion going, maybe, if I start talking about things rather than ducking and diving.” He laughed. His daughter once told him, “Oh, that was very rude.’ AND? It was an idea. It was a thought. What do you think about that thought? Want to talk about it?” Gilliam cackled.

The press conference circled back to Don Quixote, which fans have waited a long time for. What stage is he in now?

“Right today I don’t know. I knew previously, two days ago. I don’t know anymore. I got an e-mail the other night,” he laughed again, “so I’m not going to say anything. Things have gone liquid again,” he laughed. “We shall see. But it’s something for me to think about when I’ve done the job,” his voice trailed off. “A man’s got to keep a mind occupied and pretending is the best way to go through life,” he laughed.