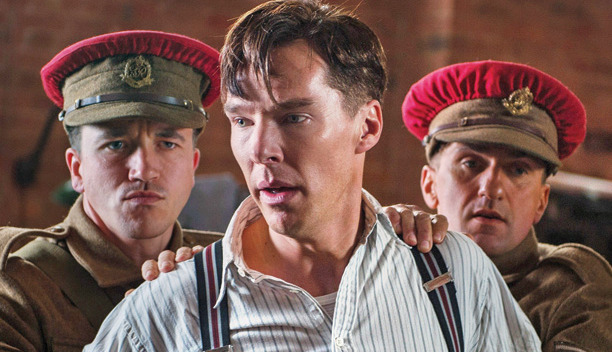 Toronto, for this New Yorker, ended last night with a bang. Morten Tyldum is a handsome Norwegian director with floppy blonde hair. I wanted to call him “Morty” as a New York joke, but after seeing his film “The Imitation Game,” there’s no joking around. Tyldum has made an extraordinary movie that premiered last night at the Princess of Wales Theater to thunderous ovations and rapturous reviews. We’re going to be seeing “Morty” a lot this winter as he accepts nominations and awards galore.

“The Imitation Game” stars Benedict Cumberbatch, Keira Knightley, Matthew Goode, and Allen Leech (Branson from “Downton Abbey) in a true story about the people who broke the Nazi’s “Enigma code” and brought World War II to a quicker end than it might have had. Cumberbatch plays Alan Turing, the genius behind the whole thing who also happened to be a homosexual. Even though Turing was a secret war hero, he was arrested and convicted of “indecency” for being gay. His sentence was forced medical treatment to “cure” him. He committed suicide in 1954 at age 41.

But it was too little, too late. And ironic, too, since Turing essentially invented the computer in order to crack the Engima code, and became the father of all computing. I mean, he literally invented The Computer.

I know all this sounds terribly serious, but “The Imitation Game” has a good sense of humor, too. The screenplay has a nice balance between light and dark, which makes the main characters extremely ingratiating. It’s also never boring.

Cumberbatch, on the fastest track of any actor in a long time, gives a richly textured performance that on the same level as say Ralph Fiennes in “The English Patient” or Colin Firth in “The King’s Speech.” He moves right to the top ranks of all young actors (along with Eddie Redmayne from “The Theory of Everything”). Cumberbatch may be the closest thing ever to a real descendant of Sir Laurence Olivier.

The rest of the cast is marvelous. Keira Knightley, already so good this year in “Begin Again,” will finally break through as Joan Clarke, the mathematician who nearly marries Turing and stands by him to the bitter end. Matthew Goode, who we’ll see on The Good Wife this year, similarly makes his mark as fellow brainiac Hugh Alexander. Leech gets to have the movie’s secret. But as in “The Crying Game,” I can’t ruin the surprise. (No, he’s not gender bender. Lord Grantham wouldn’t approve!)

Toronto has had its share of excellent films. “Foxcatcher” and “Whiplash” have already played the festival circuit on their way to multiple nominations. “Theory of Everything” and “St. Vincent” have been big crowd pleasers. Barry Levinson’s “The Humbling” with Al Pacino is a gem. Jake Gyllenhaal in “Nightcrawlers” is phenomenally creepy. Julie Taymor’s “A Midsummer Night’s Dream” is the artistic wonder. “Love and Mercy,” the Brian Wilson story, is poignant and hummable. Now I do think we can add “Imitation Game” to the list of top top front runners for 2014. It’s going to be quite a winter.