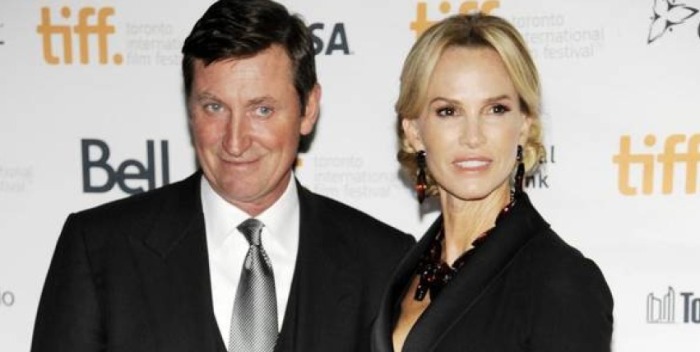 I did get to meet Wayne Gretzky last night. WTH you ask? On the second floor of Toronto’s Soho House, I ambled over to a banquette and was introduced to 80s actress and pin up Janet Jones, beautiful and lovely as ever, who said, “Do you know my husband, Wayne?”

Hockey fans: what would you say? I’ve met just about everyone but Wayne freakin’ Gretzky? The greatest hockey player of all time? Now, that’s a star.

The Gretzky’s are here in Toronto because Janet plays Mrs. Compson in James Franco’s film version of William Faulkner’s “The Sound and the Fury.” It’s a small part, she says, but the actress who starred in A League of their Own, A Chorus Line, and The Flamingo Kid is back! She came to Toronto with Wayne and their 21 year old baseball player son Trevor, who just finished minor league season with the Anaheim Angels.

The Gretzkys have five kids including 25 year old daughter Paulina, a stunner who’s also a trained singer. Paulina has made tabloid headlines for being engaged to rogue golfer Dustin Johnson. So how’s that working out? “We love him,” Wayne tells me. “I like him more than I like her,” he jokes. Does the NHL superstar ever golf with his son in law to be? “I’m not crazy,” he says. “Dustin’s the real thing.”

The Gretzky were out with young actor Jacob Loeb, a new Francophile, who plays Quentin in “S&F” and stars in Franco’s “Bukowski” as well and looks like a young James Franco. Nice guy, too.

Did I get my picture taken with Wayne Gretzky? No. Am I kicking myself now? Yes. What’s he up to these days? “Just following these people around,” he said, pointing to wife and son. It’s ok. He’s done just fine.