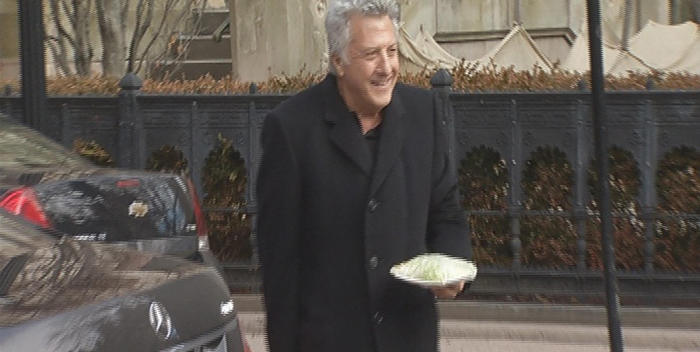 Some big studio or distributor will snatch up “Boychoir” today and have a big Christmas or Easter hit. Dustin Hoffman, Kathy Bates, Eddie Izzard and some precocious young men are superb in Francois Girard’s film about the American Boychoir, a real and famous school that tours around the world.

Of course, the music — all choral– is a salve, gorgeously produced and wonderful to listen to.

The story– with Josh Lucas in a subplot as the main boy’s father– is a little contrived but it works. And Lucas is quite good as the dad who never wanted this kid and keeps him a secret from his family.

The main boys are played by Garrett Wareing (Stet) who comes to Boychoir as a juvenile delinquent who can sing like an angel– and Joe West, the angelic little kid who’s been the star and now turns a little evil to defend his position in the choir.

So guess what? Joe West is the son of Maura West, Emmy winning soap opera actress currently turning “General Hospital” into chaos as a beautiful 40s style female mobster. When I saw her in Roy Thompson Hall last night my first instinct was to call the police or duck. Her “GH” character means business. She told me Joe was her son, and that she has five kids! This one doesn’t fall far from the tree.

Anyway back to “Boychoir”: Kathy Bates wasn’t here last night but she got a big reaction from the audience. The screenplay throws her a lot of good lines, and she never fails to land them. Izzard is fine but a little flat because of the role. If you know his work, the real Eddie Izzard is a star. Hoffman plays the “Mr. Holland” character in this opus. It’s always instructive to watch him work. He is flawless in his delivery.