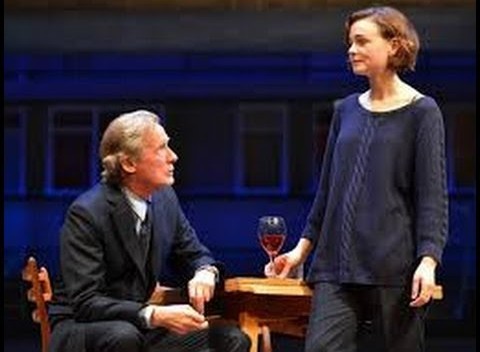 I believe I told you a few weeks ago that David Hare’s hit production of “Skylight” would come from London to get some Tony Awards. Scott Rudin is bringing Carey Mulligan and Bill Nighy over in the Stephen Daldry-directed revival just long to get some Tonys and sell out a few weeks.

People are going to be scrambling to see “Skylight” because it’s really great and all the accolades are really deserved. Previews begin April 2nd, and the runs ends June 14th, days after the Tonys. Maybe it can be extended, but this is what Tony season is now, in and out. No more lingering about…

ALSO Larry David’s “Fish in the Dark” starts on Broadway in February, with Anna D. Shapiro directing Larry. I told you some months ago that Larry was coming in with a play.  The cast includes Jayne Houdyshell, Rosie Perez, Jonny Orsini, Jake Cannavale , and Jerry Adler (“The Sopranos”).

What no one else told you: Jake Cannavale is the 19 year old son of Bobby Cannavale and Jenny Lumet. He’s also the grandson of Sidney Lumet. His great grandmother was Lena Horne. Got that? It’s in his freakin’ blood.