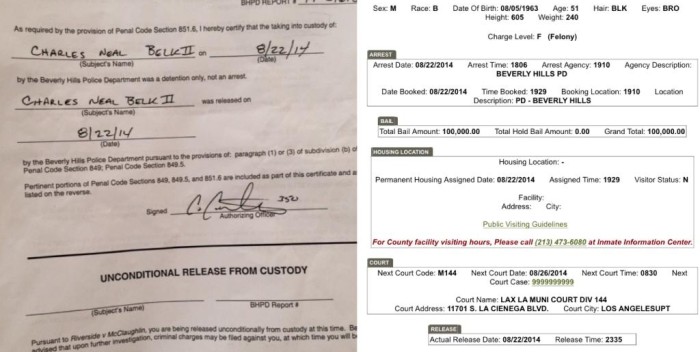 Charles Belk was wrongly–and quite disgustingly– arrested last week in Beverly Hills. His crime? Walking while black. The BHPD saw Belk — a TV producer and actor — in Beverly Hills and decided he fit the description of a wanted bank robber. They arrested him. The story made headlines. Belk — who has an MBA from the University of Indiana and a certificate from the Harvard business program– thought when he was finally released that there would be no record of what happened. Wrong. There is indeed a permanent record now in the LA Sheriff Dept. website. I’ve just seen it, and anyone can access it.

Here’s what Belk has written on Facebook tonight:
This is really disappointing!

I discovered that I still have an Arrest Record although the Beverly Hills Police Department detective that signed off on the Detention Certificate looked me dead in my face when he handed it to me and said, this indicates that we did not arrest you.

I’m a fairly smart man and I thought that “Detention” was a little strange seeing that I had been finger printed and mug shots were taken and I saw them entering it all into their system. But, I also thought to myself (in the state of confusion that I was in at the time), hey, maybe they just going to erase all of this.

Then when someone recently showed me this Arrest Report on the Los Angeles Sherriff Department site I think I lost my breath for a second. I was in total disbelief. How could he present me with this detention certificate and make it seem like everything was ok.

I now have to go through the trouble of filing a form to have it expunged from my record, and, apparently it still goes into a federal database that will always come up anytime anyone runs a background check on me and include the Department of Justice reports.

I did absolutely nothing….NOTHING. And now I have a record in the federal data base! Just because I #fitthedescription.

I plan on trying to do something about it. And if you feel so incline to take a voice in this and think that either the Beverly Hills Police Department should figure out how to resolve this for me, completely, or that the department of justice should have an easy process for all innocent people to not have something like this in their file, please let them know and send them an email, today.