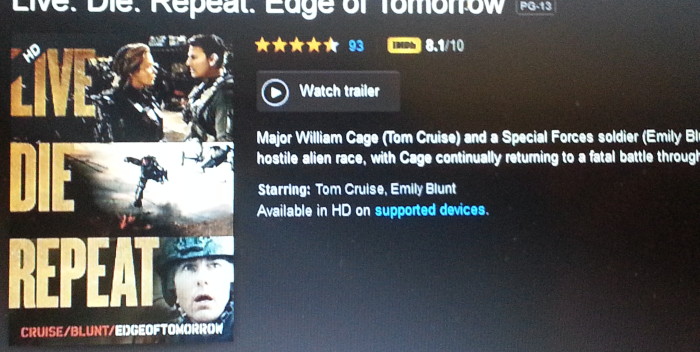 It’s so close it hurts. Tom Cruise’s first non franchise $100 million movie in years is within reach for him. If this were “Mission Impossible,” Ethan Hunt would somehow overcome the last little gap and achieve his destiny.

It would have to make $200K this week and the balance Monday through Thursday. Even then, with just a few dollars off the magic number, Warners could just leave it hanging next weekend in 10 or 20 locations.

If they really wanted to have fun, they could have a content to see who the actual ticketholder is who helps Tom break $100 million. The winner could get a Cruise bobblehead or a box set of DVDs. (Or yes, a personal tour of the Celebrity Center.)

Warner Home Video must think “Edge” was a total turkey, by the way. The cover of the DVD as advertised on amazon and iTunes retitles the movie “Live Die Repeat.” The actual title is hidden at the bottom. It’s even being touted as a pre-order for October 7th under “Live Die Repeat.” Warners had already used Live Die Repeat as a slogan. Now it’s the unofficial title.

The original title of the movie was “All You Need Is Kill,” which was changed. If “Live Die Repeat” doesn’t confuse everyone, I don’t know what will.