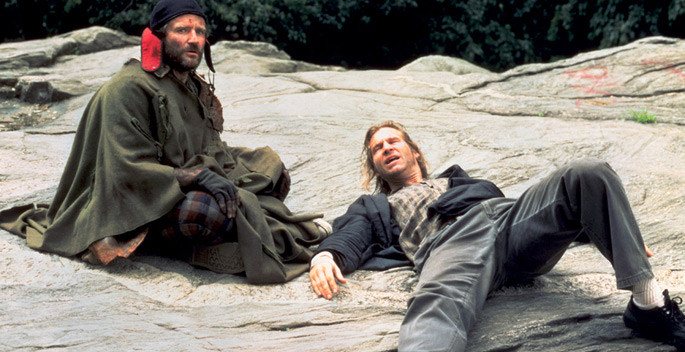 Jeff Bridges began the press conference for “The Giver” (Philip Noyce’s powerful new film) on Tuesday afternoon at the Essex Hotel with a tribute and reminiscence of Robin Williams. The actor’s death was confirmed the night before while reporters were on the red carpet for the film’s premiere at the Ziegfeld Theater, an hour before the talent had arrived.

Bridges, choked up and his voice broke several times. He and Robin Williams starred in The Fisher King. Robin’s character was modeled on a local New York character called Radio Man aka Craig Schwartz. Roger wrote about him the other day.

Bridges: “I just want to acknowledge the fullness of life, the joy and the sadness that is in store for us all and I’m filled with both of them today, as I was last night, learning of my dear friend’s passing, Robin. The wonderful, joyous feeling of giving birth to our child here, The Giver, and the combination is just quite remarkable. It reminded me of what The Giver and The Receiver might’ve felt, holding all those memories.

“It was an amazing night. I remember pulling up to the boathouse where we had our party and I’m sitting there with my wife, trying to gather myself, and I look out the window and I say, “Is that Robin? Is that his ghost? No, it’s Radio Man!” And it brought back all of these wonderful feelings of what an amazing time together here in New York, shooting The Fisher King. And I got out of the car, embraced the Radio Man and looked in his face, and I remember when we were shooting Fisher King, Radio Man remembers where all the movies were shot. I don’t know how he magically does it. But I remember seeing Radio Man, and we could not believe that Robin’s character was there in the flesh, in reality. And there he was.

“And so we embraced Radio Man, I felt Robin’s spirit as I’m feeling him now in this room with us. Just before I came down, I’m looking out my window to Central Park, my favorite part about New York, and I’m remembering the last scene of me and Robin, out there at four o’clock in the morning, nude, naked. And Robin was just wild and free, he says, ‘Let the wild pony dance!’ And he’s rubbing his butt on the grass like this, saying, ‘You know why dogs do this? Because they can!’

“He was just so wild. I just had to share that with you, because that’s what’s going on so strongly, and how much I miss him, I’m sure you guys do too. What a gift he was to all of us, and what a gift Lois gave us with her wonderful book, and Phillip down there, putting it up on the screen. So that’s all I wanted to say, let the wild rumpus start.”

The talent was arranged in two rows at the press conference. Usually the bigger names are in front. Bridges was front and center. What was unusual was that Meryl Streep was in the back row along with Taylor Swift, who has a small part in the film.

Although Streep didn’t do much talking, when she did the entire room went quiet. Asked about her part, where she plays an ice queen who bosses the entire community and monitors for rule infractions, she was asked what struck her about the material and why the part made sense for her at this point in her career.

“Well, I like to be boss, so…,” everyone laughed, “So that was a good thing. I always wanted to work with this gentleman [she pointed to Jeff Bridges] my entire career, never got the chance somehow. He eluded me. So that was a big, big part of it. Also, I’m a big admirer of Phillip’s (director Phillip Noyce) films, I think he’s pure, pure filmmaker with great taste, I knew, to bring this to life. Especially the colorless parts of it, it would take a great artist, it’s really magical.”