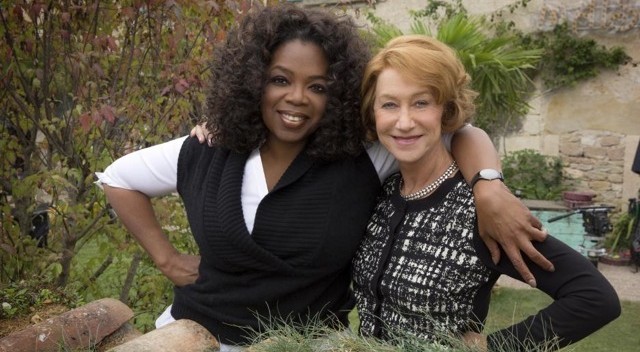 Lasse Hallstrom is one of our very best directors, and a great guy. His credits include early hits What’s Eating Gilbert Grape and My Life as a Dog. Then he had  back to back Oscar nominations for The Cider House Rules and Chocolat. He has such lovely gems as Hoax with Richard Gere; Casanova with Heath Ledger and Sienna Miller; and Salmon Fishing in the Yemen.

Both Winfrey and Spielberg are executive producers on this much needed confection of a film that traces an Indian family’s move to a French village, where they open a unique restaurant 100 feet from a 1 star Michelin French legend. The latter is owned by Oscar winner Mirren, who captivates even when she’s playing haughty and a little mean.

There is also a central romance between two very talented young (and attractive) people– played by Manish Dayal and Charlotte Le Bon. Keep your eye on these two– they’re each stars in the making.

And Om Puri, who is a superstar in India– rent his 1999 film East is East and see what all the fuss is about.

I did get a chance to talk to Oprah, who was with Stedman Graham, her long time beau. We talked about her Oscar nomination for The Butler. I still think she should have won. But the category was incredibly tight. “Who did win?” Oprah said out loud, and then we both chimed in: “Lupita.” Winfrey said: “Look at her, she’s a phenomenon.” Oprah is not at all upset about losing. By the way, she looks great.

But no one looks better than Lasse and Lena. He’s 68, she’s 59. They’re Swedish, tall, gorgeous, and look a decade younger than their ages. (Helen Mirren, who’s not Swedish, is no slouch.) The One Hundred Foot Journey is clever funny, and smart. As with Hallstrom movies, it’s deceptively sweet. But it’s actually a very deft balancing act between light and dark.

As he did with the marvelous Chocolat, Hallstrom quickly involves us in  families living in a village apart from the rest of the world. All of his people are incredibly endearing. Not only that, but foodies, fans of shows like Top Chef, will be falling over themselves to see Journey a couple of times. Caution: you will leave the theater very hungry and ready for a big, sexy meal.

The One Hundred Foot  Journey is a total enjoyment. It’s also Disney’s second hit in a row after the quite different Guardians of the Galaxy.