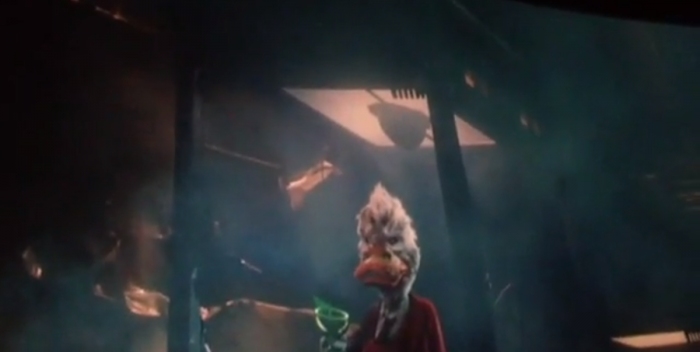 No, Howard the Duck is not back. Not really. Marvel’s answer to Disney’s Donald Duck makes a cameo appearance in the end credits sequence of “Guardians of the Galaxy.” The press was not shown this cut, but word seeped out quickly. New York Magazine’s Vulture put up a clip, and was quickly admonished to take it down. Marvel fans went into a frenzy. What could this mean?

It means…nothing. It’s just a clever riposte at the end of a very clever movie. There will be no Howard the Duck movie in the future. The only existing Howard the Duck movie was one of the great — colossal– failures of the 1980s. At the time, it cost an enormous $37 million (really probably $50 million). In the US it took in only $16 million.

And the whole thing was a George Lucas production, the only real complete failure on Lucas’s intra-stellar resume. “Howard” was directed by Lucas’s protege Willard Huyck. The screenplay was by Huyck and Gloria Katz, who’d worked on almost everything in the Lucas-Spielberg pantheon. But this was not meant to be. At the time, “Howard” was a very sore joke in Hollywood.

But bravo to the “Guardians” team. Howard sipping Champagne is a snappy end note. “Guardians” is going to go through the roof this weekend. Howard’s appearance is a reminder of what Marvel was, long ago, in another universe.