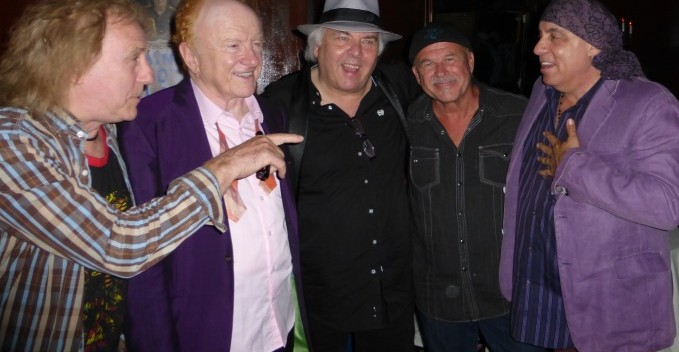 Peter Asher– the man who discovered James Taylor, started Apple Records with the Beatles, was Paul McCartney’s housemate during Beatlemania– is thrilled for Linda Ronstadt. She’s getting the Presidential Medal of Freedom next week, and she’s flying in from Tucson, Arizona just to meet President Obama. Asher produced Linda’s biggest hit albums in the 70s and managed her during her incredible ride on the charts. He told me last night at the Cutting Room that he was impressed Linda– who doesn’t travel much since being diagnosed with Parkinson’s–was going to DC.

Boston music fans can see Peter perform his wonderful “one man show” (there’s a great band) tonight at Johnny D’s in Somerville, Mass. (That’s “summah-ville” to locals.) Last night Peter wowed the house at the Cutting Room, with audience members like Billy Crystal and Little Steven van Zandt, as well as The Rascals’ great Gene Cornish, plus Billy J. Kramer and Denny Laine — of Moody Blues and Wings fame. Denny even got up and performed the Moody Blues’s seminal pre-orchestral hit “Go Now.” He was sensational.

Peter’s show details his life in music as one half of Peter and Gordon, who had two of three hits that Paul McCartney wrote for them specially. It helped that Paul, who was dating Peter’s actress sister, Jane, was living in the Ashers’ London home. When Paul and the Beatles started Apple Records, they asked Peter to come in and run it. He obliged by discovering James Taylor and signing Badfinger, among others. His show includes rare video footage and photos of all the famous people he’s been involved with.

Mostly what’s nice, always, is hearing the Peter and Gordon material of sweet harmonies. Gordon died a few years ago, but not before the pair reunited at a fundraiser for the Dave Clark Five’s Mike Smith. If you’re old enough to remember “World Without Love” and “Lady Godiva,” don’t miss his show.

PS If you pick up or download Elton John’s 40th anniversary edition of “Goodbye Yellow Brick Road” take note– Peter produced the new versions of the songs by contemporary artists. That’s why they sound so good!