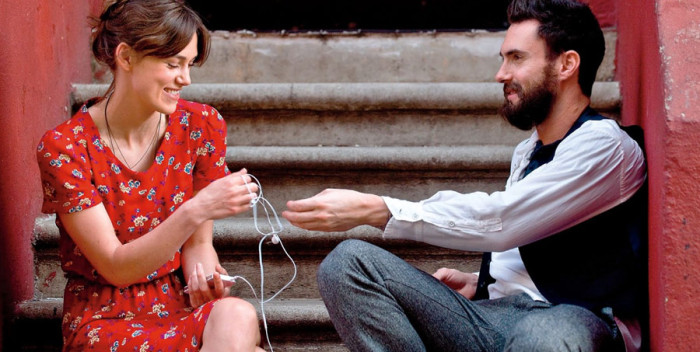 A movie called “Begin Again” opens today in New York and Los Angeles, around the rest of the country on July 2nd. Mark Ruffalo, Keira Knightley, James Corden (2011 Tony Award winner for “One Man, Two Guvnors”), and Maroon 5’s Adam Levine get it just right in this romantic comedy with catchy pop songs from the New Radicals.

Levine sings, of course. But Knightley sings, too, live and into the mic for all her songs. She really sang, too. “She has more character in her voice and delivery than a trained, proper singer,” New Radicals songwriter Danielle Brisebois told me the other night at the movie’s premiere. “I’d rather hear Keira anytime.”

Danielle– yes, Brisebois– you know her as a child actor on “Archie Bunker’s Place” and as a teen on “Knot’s Landing.” She just had twins, and is married to musician Nick Lashley. She and Gregg Alexander are top 40 top songwriters who were once the New Radicals. They made on album that had two major hits– “You Get What You Give” and “Someday We’ll Know.” “Begin Again” is their follow up album 15 years later, although they’ve written lots of hits for other pop stars since then.

I was flabbergasted today by a review in the NY Times by A.O. Scott, with I whom usually agree about films. He dismissed the music from “Begin Again.” No no no Tony. “Begin Again” is full of hits. They are so good they are like a box of chocolates. And director John Carney has woven them into the movie progressively and knowingly. I’ve been writing about the music business for — dare I say it?– 40 years. Carney and crew get it exactly spot on. In fact, a friend of mine from the biz was in town and came with me the other night. And she was beside herself grinning.

For music lovers, “Begin Again” is number 1 with a bullet. Rob Morrow and Mos Def each play music execs, and they could not be more perfect in their oily but engaging presentation.

But it’s Mark Ruffalo who carries the film as Dan Mulligan, an A&R guy who has a big success, starts an indie label, then loses his way, This is a knockout performance. If they’d shown “Begin Again” at this week’s UJA Federation lunch for music execs (honoring Neil Portnow) the room at the Pierre Hotel would have gone crazy. Ruffalo is channeling about 50 people everyone knows, and he swears he didn’t pattern it on anyone in particular. If so, he’s just very very good.

See this movie. If it makes sense to you, I’ll say this: if you liked “Almost Famous,” then “Begin Again” is for you. You know what I mean.

Soundtrack is out on Tuesday.