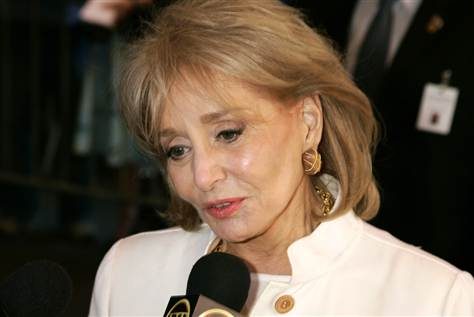 Barbara Walters is having what they call a Field Day today. She’s been on “Good Morning America” and now she was just on “The View.” Remember, ABC News retired her six weeks ago. But now she has a special tonight, an interview with Peter Rodger, father of Elliot Rodger, the kid who killed 6 people in Santa Barbara.

Meanwhile, our “Santa Barbara” Walters reminded the audience and staff of “The View” that she’s still the executive producer of the show. It was the first thing she said when she sat down. She also invoked Bill Geddie’s name. The show was taped Wednesday. Within 36 hours news broke that the show was dumping Geddie plus co hosts Sherri Shepherd and Jenny McCarthy. The backstage fighting is said to be hand to hand.

And then there’s this Peter Rodger interview. They’ve pitched it that Rodger asked for Walters specifically, and that ABC News chief James Goldston called Walters and informed her of this. Maybe. But my guess is that Barbara campaigned and got Rodger, just to show that she’s still Barbara Walters. She’s throwing Goldston a bone in this version of the story. He has now learned you cannot outplay Barbara Walters. She’ll be on ABC until she’s 100 years old, trust me.