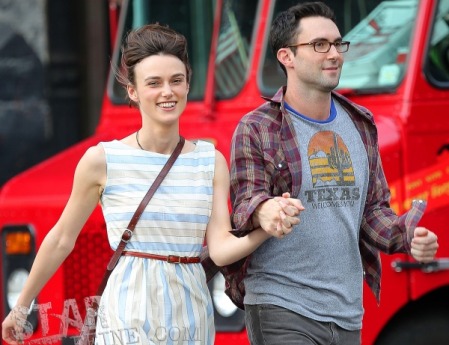 Adam Levine? The Maroon 5 lead singer makes his acting debut in “Begin Again,” the most charming romantic comedy of the year. A little spoiler: Adam’s character Dave Krohl, is a snake of a rock star who buys into his own PR. And the name– unintentionally (?) sounds like a real rock star, Dave Grohl.

Adam brought his super model fiancee to the premiere last night. Her name is Behati Prinsloo. She is not Jewish. Behati brought a friend with her who was her near-duplicate. They were lovely, gangly, other-worldly. It’s so good being a rock star. Adam and Behati are getting married at an “undisclosed location” around July 19th.

But the real summer of Adam Levine is tied to his terrific acting and singing in “Begin Again.” There should be a big hit single from the movie, called “Lost Stars.” When the soundtrack hits on July 1st, I command every radio station in America to play it. This is the kind of hit radio needs.

“Lost Stars” should be the song of the summer.  It’s written by the New Radicals’ Gregg Alexander and Danielle Brisebois. Danielle’s famous musician husband, Nick Lashley, known for playing lead guitar on Alannis Morisette’s hit singles. Nick wrote the instrumental score for “Begin Again.” If these guys don’t get Oscars and Grammys for this work, some thing is really, really wrong.

How did they get involved with “Begin Again”? “A friend introduced Gregg to director John Carney,” Danielle told me last night. Who was that? “Bono.” Oh yeah, just him.

As for Levine, he has a new Maroon 5 single out called “Maps.” The new Maroon 5 album will be released on September 2nd. Then “The Voice” starts up again. Behati may not see him again until March 2015, so the honeymoon had better be good!