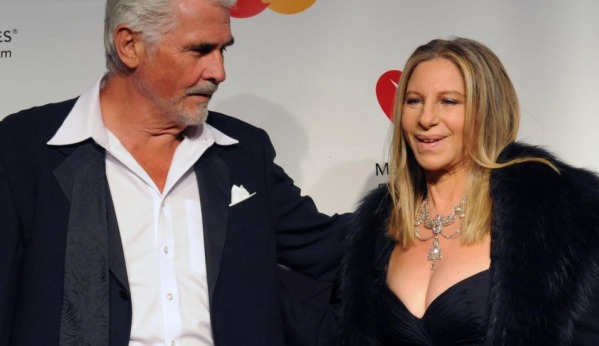 If you read the supermarket tabloids, Barbra Streisand and James Brolin are on the verge of divorce, have already negotiated a wild settlement, “are living together but living separate lives.” Just like Nicole Kidman and Keith Urban, and many others.

No one gets a better laugh about it than James Brolin, one of the nicest guys ever.  We had a reunion last night at the all star screening of the beautiful documentary about late film critic Roger Ebert called “Life Itself.”

“It’s so funny,” Brolin said, “because Barbra is coming here at the end of the week. We’re celebrating our 16th anniversary together.” The big day is next Tuesday, but Barbra comes in over the weekend. If I were a gambling man, I’d say Donna Karan is involved somehow.

Brolin– who played Ronald Reagan so brilliantly a couple of years ago in a TV movie– is busy shooting “The Nest.” The real life father of Josh Brolin plays the movie father of  siblings Tina Fey and Amy Poehler. Dianne Wiest plays his wife. “I’m having the best time,” he told me. “Dianne is great. And can you imagine me with those daughters?”

Meantime, Streisand, I hear, had a reading this past week in Hollywood of yet a new script for a movie about photographer Margaret Bourke White and writer Erskine Caldwell. I told you about the long painful history of this project a while ago. Now Streisand has a new script, and is trying to realize this film as her next directing project. Producer Linda Yellen used to be involved in this. Maybe they can get it back together.

Brolin was just one of many familiar faces who came to pay tribute to Roger Ebert via filmmaker Steve James and Ebert’s widow Chaz. All I can say about Chaz Ebert from knowing her and watching the very candid, tearful film is that she’s a saint. Everyone admires this woman so much. Roger and Chaz were such a love match, and she did everything she could to alleviate his suffering. What he endured with cancer of the jaw was inhuman.

And what a New York night: Peggy Siegal had to balance two big events, this one and the HBO premiere of “The Leftovers” downtown. Their guests only included Justin Theroux and Jennifer Aniston, Liv Tyler, Josh Charles, Jill Hennessy, and Taye Diggs. Plus Liv’s mom Bebe Buell looked gorgeous, and her ex-step dad famed rocker Todd Rundgren reminisced over delicious food at Tao Downtown.

And this was a Monday! Plus my twin 14 year old nieces, Hannah and Charlotte, graduated from 8th grade on the Upper West Side.

Time for a nap!