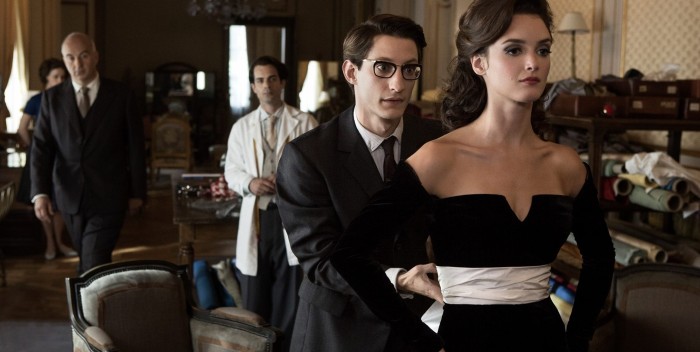 Who was he? A big French designer. Both movies are similar, even though only “YSL,” coming from the Weinstein Company, is authorized. The other is not.

But here’s the story: he was thin and quiet and French. He had a lot of sex with various young men, did a lot of drugs, moped around, then stumbled around, and then died. Is there an audience for this? Perhaps.

Last night, real designers Martha Stewart, Nicole Miller, and beloved Vogue editor Grace Coddington. as well as  some otherwise pretty, vacant people turned up at the Museum of Modern Art to see the movie. Later, we went to a restaurant next to the Paris Theater called “Beaute.” I ran into Matchbox Twenty’s Rob Thomas and his beautiful wife Marisol. Sarah Green, the pretty young Irish actress from “The Cripple of Inishmaan” on Broadway, came with Vogue’s Jill Demling. Gina Gershon waved to me. The rest of the guests were so thin that you could literally read between their lines. Models. Stick figures.

The “YSL” movie is well made. But like the other one, it has problems: they’re in French, and not much happens. They’re beautiful to look at. The people drape themselves this way and that. In “YSL,” Pierre Naney is very good at wearing chunky glasses and looking wan. It’s hard to imagine the real YSL becoming so famous and having so many designs because in the movie he does very little except pout. Guillaume Gallienne is a little more interesting as the enigmatic Pierre Berge, who was YSL’s lover, business partner, and heir. In this movie, he darts about like Inspector Clousseau.

In “Saint Laurent” not much else happens. Pretty people slouch around in well tailored outfits and drape themselves on divans. In this film, which Sony Pictures Classics picked up in Cannes, there’s full frontal male nudity and more vivid gay sex scenes. The actor who plays Saint Laurent looks, wearing glasses, like Andy Samberg. I kept thinking he was going to start making jokes. The actor (Jeremie Renier)  playing Berge, resembles the late David Groh, the husband on “Rhoda.” He’s sharp and pointy, unlike Gallienne. Berge remains a mystery.

A French bulldog completely steals the movie and should be nominated for Best Supporting Actor. He turns in a superb death scene.