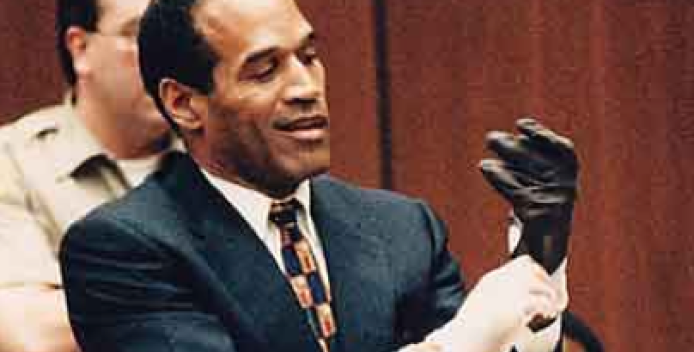 Thursday June 12th, 2014 is the 20th anniversary of the murders of Nicole Brown Simpson and Ronald Goldman, here’s what I wrote back in 2006:

O.J. did indeed “do it.” He killed two people in cold blood on June 12, 1994. One of them was the mother of two of his children. Yes, he was acquitted by a jury in the criminal matter. But he was also found responsible for the murders by a more sensible civil jury in 1996.

I covered the O.J. Simpson trial for New York magazine and broke a lot of the stories surrounding that circus. For six months, from the day of the murder until the pretrial hearings kicked into gear, I followed every possible lead that would prove Simpson innocent. These included Nicole’s horrible little friend Faye Resnick, as well as many other similar murders in L.A. around that time.

And this is what came up: No one but O.J. Simpson could have killed Nicole Brown Simpson and Ron Goldman. His friends may have helped cover it up, but in the end, it was all O.J.

There were a lot of theories about how he did it and lived with himself afterward. Apparently, in the unpublished book he says he had a “black out” period — if he did it.

One theory that I came to subscribe to was supplied by a freelance writer and his brother, who was a Harvard forensic psychiatrist. To this day it makes the most sense: Simpson was having steroid rage. This wasn’t from being on steroids, but from getting off of them. He’d been addicted to them for years when he took a pounding in football and stuck with them later for rheumatoid arthritis.

A lot of different details added up to this conclusion. For weeks, Resnick’s boyfriend, Christian Reichardt, had been weaning Simpson off the steroids with a fruit drink that Simpson promoted in a TV infomercial. Reichardt told me this had begun in late March, early April 1994. By June 12, Simpson was probably not feeling too well. Erratic outbursts, extreme emotions — these were indications that his withdrawal was not a success.

In the infomercial, made March 31, 1994, which was entered into evidence but never pursued, Simpson recalls “They had me on — you name it — Naprosyn, Indocin, Motrin, I, I had so much Motrin you couldn’t believe it, you know.”

Then he talks about the miraculous turn around in his life from drinking Juice Plus: “And then before I knew it, I just start skippin’ the Naprosyn and skippin the Indocin and skippin the pain pills, uh, the Advil. I mean I was one of these guys who was on six or seven Advils a day, you know, until today when I don’t have to take anything.”

For some reason, no one bothered to ask the doctor what the effect would be of no longer taking all those drugs. And no one asked Dr. Robert Huizenga — a doctor whose specialty was steroids and athletes — one word on that subject as well.

Simpson, I learned from the FBI lab in Washington, had been tested for eight different kinds of drugs but not for steroids when he was arrested.

My sources’ claims, they say, were further emphasized by the Bronco “chase.” Al Cowlings, who’d been in the car with Simpson, described to a writer he’d hired for a book proposal that Simpson had been sweating like crazy in the car. His face had turned “golden,” Cowlings recalled. Sweat poured from him. Simpson was so incoherent that he let Cowlings do the talking for him.

The chase was on June 15. Three days earlier, Simpson had returned to L.A. from a visit to Chicago. Howard Weitzman had been his lawyer. Dr. Bertram Maltz , now deceased, had been his long-term physician.

When Weitzman handed over the reigns to Robert Shapiro, the first thing Shapiro did was get rid of Maltz and bring in Dr. Huizenga. Huizenga had just published a book on the subject, as physician for the L.A. Rams.

In his testimony at the criminal trial, Huizenga said that Simpson had given him “a one-month history of drenching night sweats so severe that he would have to get out of bed, towel himself off and go back and sleep in the dry portion of the bed.”

But nothing more was asked in this area by either side, and the words “steroid” or “rage” or “withdrawal” never again came up either in direct or cross-examination.

As I wrote then: “What was most alarming, Huizenga told me, was how prosecutors treated him. His direct questioning by the state was from Deputy District Attorney Brian Kelberg, who worked for Marcia Clark.

“I told them that Simpson appeared to be limping when he came into my office. Instead of asking me about that, they said, ‘He wasn’t limping, you’re lying, we have tape of him from two months before.’ It’s odd that the prosecutors didn’t even bother to ask about the sequelae,” he said, tossing some much-needed Latin into our conversation. In other words: Clark’s team never asked why Simpson had been limping, or what would have brought him to that point.”

Indeed, Clark and Chris Darden , who went on to have fame and make little fortunes off their horrendous loss in court, didn’t do a lot of things right.

A lot of people blamed Judith Regan for attempting to publish Simpson’s book “If I Did It.” But Clark and Darden are the real culprits here, and the reason why O.J. Simpson is still walking around and causing trouble.