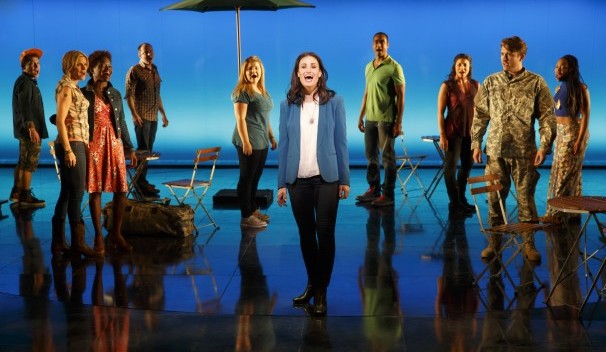 There were lots of performances last night on the Tony Awards, all live, none lip synched. Everyone sang songs from the shows they’re in for 8 shows a week. Some people sang songs they’d never sung before, like Jennifer Hudson introducing a number from the still cooking “Finding Neverland.”

Only one performer used a TelePrompter, however. Idina Menzel read the words to the turgid “Always Starting Over” as they scrolled by in HUGE letters. I know, because I was sitting just to the side of the TelePrompter, which was otherwise used to cue presenters and remind them of what they were doing.

Of course, the screechy “Always Starting Over” isn’t a song as much as it’s a filibuster, a speech, a declamation, and a bore in my opinion. Maybe Idina can’t remember all those words. Maybe she’s too busy getting ready for her one woman show next Monday at Radio City, which she’s fitting in between performances of the dreadful “If/Then” to capitalize on her “Frozen” success.