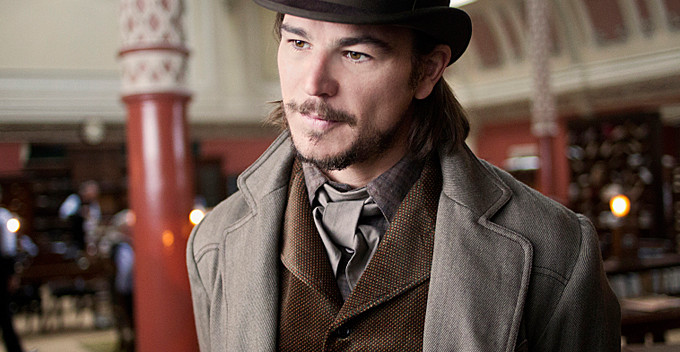 Showtime’s “Penny Dreadful” made a big splash last night with a star studded premiere in New York. No less than Sting and Trudie Styler, as well as CBS chief Les Moonves, turned out to applaud “Penny” creator John Logan and his formidable cast. They include Josh Hartnett, making a comeback after a short time out, plus former James Bond Timothy Dalton, Broadway’s “Spider Man” Reeve Carney, and the beauteous Eva Green.

Hot stuff indeed. The entire “Penny Dreadful” premiere took place at the new Highline Hotel, built onto the grounds and into some of the buildings of the famed Episcopal Seminary on West 20th St. and Tenth Avenue. Yes, a hip hotel has been grafted onto a religious order on a tranquil campus.

It was pretty amusing last night as a red carpet, kleig lights and a step and repeat backdrop were laid out in front of Seminary offices. Collared clergy of both sexes hung out on the side as entertainment press, photographers, camera crews and paparazzi clamored for the cast.

Inside a tented area set up for VIPs, Sting and Trudie mixed and mingled with guests. They were there because Logan did a polish on Sting’s forthcoming musical, “The Last Ship,” which starts previews June 10th in Chicago.

I chatted with them, and with Josh Hartnett, an amiable guy I hadn’t seen in quite a while. After some disappointments in big budget films, he wisely retreated to some indies. Now it looks like he’ll have a hit with “Penny.” He’s still tall and handsome, and just a lot wiser about Hollywood. Was he burned out, I asked?

“I wouldn’t say burned out,” Josh replied. “I just know more.”  Wait til you see his opening scene as a traveling Buffalo Bill-type in the Wild West. It’s a reboot for his career that should take him back to movies in no time.

Reeve Carney, still waiting for a green light to play Jeff Buckley in “Dream Lover,” just finished three years playing Spider Man on Broadway in Julie Taymor’s legendary production. “Spider Man: Turn off the Dark” was a trial by fire. Before that, he’d had a rock band. He’s happy to be a supporting player in “Penny.”

“This is giving me time to get used to being in front of the camera,” Reeve said. By the time “Dream Lover” is ready to roll, he’ll have had this experience too. But really, it’s time for Jeff Buckley’s mom to let that movie commence. Carney’s a natural in “Penny.” He will make her proud.

“Penny Dreadful” starts on Showtime on Sunday night. But you can watch it right now on www.sho.com. For free!