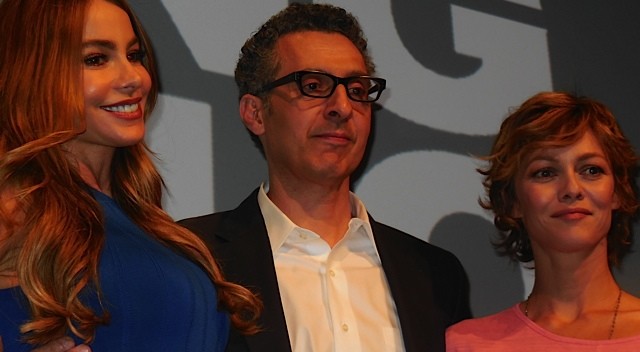 Imagine John Turturro portraying a sexual dynamo for hire whose expertise is satisfying the emotional and sensual needs of lonely middle-aged women. They are portrayed, no less, by Sofia Vergara, Sharon Stone and Vanessa Paradis.

You buy this premise in “Fading Gigolo,” which Turturro also wrote and directed, because his character, Fioravante, an underemployed florist turned gigolo, is such a sweet and lovable character., Fioravante’s skill is less in sexual technique than in really listening to what women want.

This past week, Turturro, Paradis and Turturro participated in a press conference at the Crosby Street Hotel to promote “Fading Gigolo.” Journalists were e-mailed beforehand not to bring up Woody Allen’s personal life or anything to do with Mia Farrow, and to just stick to his role in the film.

It turns out “Fading Gigolo” came about in an offhand remark Turturro made to his barber, who he shares with Allen. He told the barber he wanted to make a movie where he played a prostitute and Woody Allen played his pimp. The barber relayed the movie suggestion to Allen, who called him soon afterwards and told him he was in.

“He just told me to write the draft and he would give me his feedback,” Turturro explained. “I didn’t know what that meant exactly and then when I received it, I was like, “Whoa! Wow! This is feedback!” It was brutal basically, but it was a first stab at something and I hadn’t really kind of gotten into the world personally yet.”

Turturro said Allen had a lot of ideas that were broad but not specific. “Right after that he said, ‘Don’t you want to do something more sophisticated?’ and I said yes, but he didn’t’ tell me how to do that, so I had to find my own way and basically I would do another draft and he would say, “This works, and you should develop that,’ whatever.’ He made some very good comments without telling me what to do.”

Allen’s big contribution was suggestions on how make the film more nuanced. Then in the middle of the project Turturro, who worked on and off on the film for two years, directed one of Allen’s one-act plays on Broadway and they became closer. “You see some of our relationship in the movie in an imaginary circumstance and that wouldn’t have been if we hadn’t gotten to know each other that way.”

The first day on set Allen flubbed his lines and Turturro freaked a little. “And I was thinking, ‘Oh my God!’ he skipped like three paragraphs and my first note to him after cut was, ‘I think you jumped from here to here and he was like, ‘Oh God!’ and so, I was looking a him thinking, I have to actually tell Woody Allen what to do.” After about 30 minutes, Turturro said, it was ok. “He was really easy to work with and he was good with everyone. And he was good off camera.”

The movie is shot on film, Turturro said, because he wanted the softness and sensuality of the skin tones and the vivacity of the cultural and racial diversity of New York City. In another quirky twist, Allen’s character is married to an African-American woman (Tonya Pinkins) and they have a trio of boisterous children.

“He was great with those kids because they treated him like, they didn’t know who he was,” Turturro said. “They were like, you’re just an old man. One of the kids, Isaiah (Clifton), would step on Woody’s foot whenever Woody would forget any lines and Woody would yell, ‘Why are you stepping on my foot?”

“Fading Gigolo” also stars Sofia Vergara – gorgeous from every angle – wore sky-high stilettos that elicited “Oohs and aahs” from journalists from the moment she shimmied into the press conference.

Vergara was asked how she got into character to play a sexy woman who finds her perfect man. (She plays best friend to Sharon Stone’s character, a successful dermatologist who feels a sexual spark missing from her marriage and suggests a ménage a trois with her and Turturro.)

“I don’t think we were looking for the right man. We were praying for the right man,” Vergara replied. “I don’t that we were putting too much thought into it. It was like handed to them and personally for me it’s chemistry, and I think these women were a little bit, they needed maybe to do this in their life because they have a little emptiness, something, even though you see that they’re powerful, beautiful. They’re successful, worldly. I think when you need to do something like this it’s because you’re lacking something and I guess – I don’t want to judge them – I think if this was what they needed at the moment in their life and they had the money and they could afford it, why not?”

Paradis (Johnny Depp’s ex, with whom she has two children) was asked the same question. In another offbeat casting choice, she play Avigal, a widowed Crown Heights Hasidic woman with six children, who is lonely and yearns for something missing in her life that she finds in Fioravante, introduced to her by Bongo. (Liev Schreiber plays a bumbling neighborhood Hasidic cop who secretly has a crush on her.)

“My character is not looking for it, but Woody Allen’s character, starts to inform her that there’s something else in her that she’s seeking, in the character that I’m playing,” Paradis said, “She’s really interested in knowing what’s there, five miles away” in Manhattan. She’s motivated by “curiosity and wanting to be happy.”

Vergara, who’s as much of a live wire in real life as the character she plays in the hit sitcom “Modern Family,” was asked if she didn’t feel boxed in by her sexy, funny, bombshell parts. Maybe she yearned for really dramatic roles, in black-and-white films?

“I think you know, you have to know your limitations. Of course I’m not going to tell my agent, you have to let them see me, they’re casting ‘Schindler’s List,’ I want to be in that movie.”

“I know where I can have fun and do a good job and I met John and I knew, I’m very insecure about the acting because I’ve never done it until recently and I knew I like to be directed and he told me exactly what he wanted from me and he was a lot of fun I think you have to be grateful,” she said. “After all the opportunities like this movie that I have gotten I don’t think I have to be complaining, oh they don’t let me cry or let me raped in a movie.”

“I’ve never done anything like that, so I was coming a little nervous, but I think he was more nervous than I so once I saw him so nervous I got relaxed.”

At the end of the conference the actors posed for group shots.

“My boobs are going to move,” Vergara laughed when Turturro hugged her.

Ever the director, he told a photographer, “That’s not a good angle. Too much over there. You should never shoot from a low angle with ladies.”